In a life spent buried in music, it’s easy to lose track of yourself. What you hear changes you, reshaping who you are with every turn of the groove. It becomes hard to remember what you’re hunting for – what sent us plunging into the depths. Connoisseurship is a perilous realm. In those rare moments that I clamor to the surface, retracing the ground I’ve covered – attempting to make sense of it all, an image crystallizes. Masked within tones and rhythms is a search for truth, for the sound of human experience – uttered with generosity, honesty, and without artifice. My love is for people, and for their voices, however (and wherever) they might be realized. It’s sent me thrashing away from pop culture, and delivered an endless stream of remarkable sounds to my ears.

There’s no prescription. There’s no one way, but it’s hard to ignore that music made without ambition, or the influence of capital, nearly always rises to the top. Necessity and honesty touch our hearts the way few things can. More than a century ago the recording industry began taking possession of our sounds, our songs, and our voices. These sacred crafts, maintained and nurtured for millennia, were formed into digestible products, engineered to be easily sold – before an inevitable disregard. These arts were once public, shared, sung, and passed into the hands of subsequent generations to make their own. Music was the cradle of culture. Our voice. A people’s catharsis. A means to share, to tell our stories and histories, to commiserate, to unleash and let go. It belonged to its audience as much as it did to an artist. To commodify it is to lose it, and to lose it is to lose ourselves. Our cradle has been been robbed.

As an avid record collector it’s impossible take issue with the act of recording – or even its packaging and subsequent sale. This doesn’t mean we should lose perspective – forget where it all came from, its potential, in whose hands music should be held, or the nature of it’s purpose and role in our lives. In these strange times, when we could use it most, I long for music made for its own sake, to commune, and bind us together – to push back the darkness, remind us who we are, and that we’re not alone.

My record collection is an attempt to build an ideal world. To join cultures and collapse time. To embrace and hear those with whom I share the earth. Music is their voice in my ear. It is the first step toward empathy, understanding, and becoming something else. Within my stacks, piles, and bowing shelves, few sounds match those of Mid-Twentieth Century field-recordings of rural African American folk music. These sounds (now largely lost) rested in the hands of everyday people – farmers and factory workers, fishermen, cooks, mothers and daughters. It was theirs, and theirs alone – by and for its audience, without hope for profit or return. It was their voice – rising from porches, yards, parties, funerals, and at worship. Albums of this music are precious few. I have taken a great deal of time and effort to amass what I have. My love for them is deep. The music is as honest as it is profound. I’ve worked my way through period, genre, geography, and recordist, and despite the scale of what I own, I’m forever nagged by what I am yet to hear. Few sounds reach its heights, plum such depths, and move me the way this music does. It returns me to what all music once was. Our voice, catharsis, means to share, tell our stories and histories, to commiserate, to unleash and let go. It has become my root, and where I return to remember.

Field recording in the 1950’s and 60’s was defined by a handful of figures. Some were fans hunting for lost creators of their favorite recordings, others approached their craft with scientific rigor. All were bound by a deep love and belief in the importance of this music. Though Alan Lomax largely defines the field, and is its the most notable contributor, he was far from alone. His recordings are joined by the incredible efforts of Frederic Ramsey Jr., George Mitchell, Harry Oster, David Evans, Harold Courlander, and Sam Charters, among others. 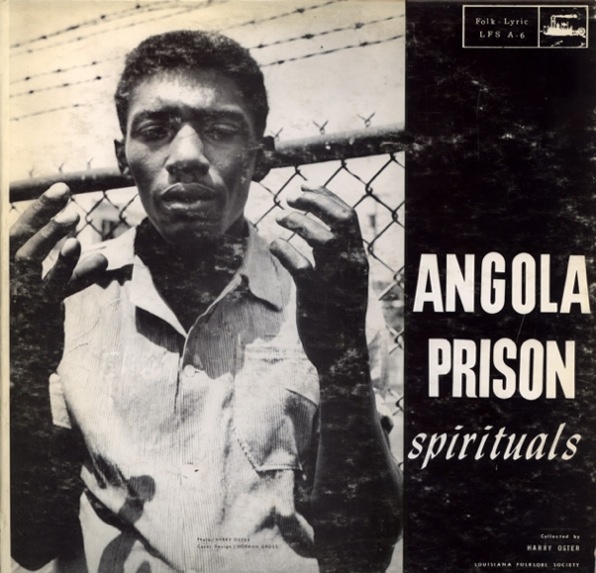 I first encountered this music during my early 20’s when chance lead me to the 1958 pressing of Negro Prison Songs. The album was recorded by Lomax in 1947 at the Mississippi State Penitentiary at Parchman. I’m not sure what compelled me to buy it, but when I got it home I found myself driven into the wall by its pure power. We’ve all heard the sound of the chain gang, but this is something else. These songs reached across time, destroying barrier between singer and listener with voices bound by hope and despair. The emotion they possessed summed every ounce of the human experience. I’ve heard few recordings which come close to what it possesses. I knew little about it. All I had to go on was “prison songs.”  I wanted more. Soon I came across an album on the Louisiana Folklore Society label (later reissued by Arhoolie) from 1959 called Prison Worksongs recorded by Harry Oster at The Louisiana State Penitentiary at Angola. I promptly bought it. It was equal to Lomax’s recordings and sent me scrambling through the crates for more. Within a few years I had gathered every available recording of Prison Songs that had ever been released with the exception of one – the companion to Oster’s Prison Worksongs released under the title Angola Prison Spirituals on his own label Folk-Lyric in 1959.

I spent years hunting for Angola Prison Spirituals. Though I’m not sure why, it proved to be incredibly difficult to find. Eventually I prevailed and wasn’t disappointed. The most common idiom of Prison Song grew from a broad tradition of “Work Song” where the beat or rhythm generated by certain manual labors is accompanied by the worker’s voice. Many prisons in the American South were “work farms” where the inmates were forced to break rock, chop trees, or toil in workshops while serving their time. From these dire circumstances and the clatter of axe and hammer, grew the profound music we now recognize. Prison Spirituals stands slightly apart from this tradition. It should be viewed through the broader lens of Southern music. Some of the earliest field recordings in the South were taken in 1933 by John Lomax and his son Alan. Crucially the focus of their expedition was on prisons. Their understanding was that inmates possessed the highest concentration of traditional songs committed to memory. They weren’t looking for Prison Songs as much as they were for the widest cross section of music in a single location. Music was part of surviving internment. Its life was rich within the walls. The music they recorded lays the precedent for the collection found on Prison Spirituals. Rather than Work Songs, the album is largely comprised of songs by inmates accompanying themselves on guitar and other instruments, and as such is closer to what you might expect of the Country Blues. Roughly half of the albums contents represent the remarkable Robert Pete Williams who was later to become one of the first Blues artists featured by John Fahey’s Takoma label. At the time Oster discovered him he was serving a life sentence for fatally shooting a man in a nightclub. He was later pardoned with Oster’s assistance. Both his guitar playing and voice are filled with emotion and power. He’s about as close to the real deal as you can get. He had to sing to get it all out. There isn’t an ounce of entertainment, self-consciousness, or artifice. This is the human experience laid bare. The remainder of the album represents wonderful hybrids between the blues and gospel traditions by other inmates at the prison. As the title suggests most of the songs are spiritual in nature, wrapped in anguish and reflection between the worlds of circumstance and judgement.

Tom Dutson – Dig My Grave With a Silver Spade

A couple of years back I noticed the emergence of a small cassette label called Death Is Not The End from London (where I was living at the time) who were issuing some of the most notable Mid-Century field recordings and blues from the American South. Their first release was a tape release of Angola Prison Spirituals, and was shortly followed by some of Lomax’s prison recordings, Frederic Ramsey’s incredible recordings of Horace Sprott which had originally appeared on the 1955 Folkways collection Music From The South, as well an Washington Phillips cassette and a number of other great Gospel and Blues releases. Despite loving cassettes, because I already owned the original pressings of what they were putting out, I couldn’t compel myself to pick anything up – but I thought what they were doing was great. I just noticed that they label is plunging into the world of vinyl after a fantastic run. Their first release is a new pressing of Oster’s Angola Prison Spirituals, and thus my reason for writing now. You can get it from them direct or cross your fingers that it comes to a record store near you. They’ve only pressed 300 so don’t wait. I can’t recommend this one enough!