Over the last few years, I’ve suffered from a growing ambivalence to live Rock & Roll. It’s a surprising development of my thirties, and a moment that every music fan dreads – when that thrill is gone. This isn’t a latent conservationism bubbling from below. Age has taught me to demand more. The older I am, the more I want to be challenged, disturbed, twisted, and fucked with. I want music to be a mystery. I want to return changed. The sounds of my former lives remain exciting, as do their creators. I still faithfully trudge out to see The Ex, Shellac, MV & EE, anything Thalia Zedek touches, Yo la Tengo, and it breaks my heart to have missed those This Is Not This Heat shows at Cafe Oto last week. If the Gunn-Truscinski Duo ever return, I’ll be right up front. But as a rule, with the passing days, Rock & Roll (and its relations) is a less thrilling ride. New bands usually tread well established territory, and leave me in want. There is an exception – 75 Dollar Bill. In their short run, it feels like I’ve seen them 100 times. I’m never let down. Each show begins without prediction, and ends far inside the unknown.

Having received accolades from The New York Times, the most noted names in independent music (Ira Kaplan, Marc Masters, etc.), and seemingly everyone in between, they hardly need me to sing their praises. Here I am, all the same.

75 Dollar Bill is a collaboration between Rick Brown and Che Chen. Rick has been a percussionist in the wilder end of the NY music world since the late 70’s. He’s been in more legendary bands than most – V-Effect, Run On, Timber, and Fish & Roses. He’s also embarked on various collaborations with Sue Garner, Tortoise, Matmos, Yo La Tengo, Charles Hayward, Fred Frith, Malcolm Mooney, and Elliott Sharp, among others. Che’s been a staple in NY’s experimental music scene since the early 2000’s. He’s worked under his own name, as part of True Primes, in collaborations with Jozef van Wissem, Andrew Lafkas, David Watson, Maher Shalal Hash Baz, and Che-Shizu, among others, and as part of Tony Conrad’s ensemble. In addition to creating music, he’s also responsible for the incredible O Sirhan, O Sirhan  zine, and Black Pollen Press, which released that astounding Pauline Oliveros / Eliane Radigue / Yoshi Wada / Sun Circle LP a while back. If that wasn’t enough, Che’s writing for Other Music was partially responsible for creating the context of wider appreciation for Non-Western traditions of music we’ve seen blossom in the last few years. He makes the rest of us look bad. 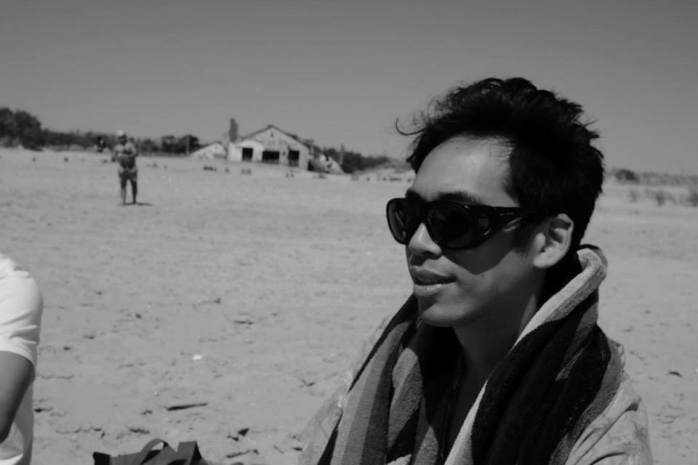 Che and I moved to NY during the same rough period during the early 2000’s. We had a lot of friends in common, our paths crossed regularly, but our friendship was slow to unfold. When the seeds reached soil, he carved a place close to my heart, and has remained there since. He’s one of my dearest friends. For more than a decade, no matter where we have found ourselves in the world, it is rare for a week to pass without us being in touch. Our conversations, and shared passions, are part of the landscape which contributed to my founding The Hum.

I spent 2013 dividing my time between London and NY. After having lost the better part of a decade in Europe, it was nice to spend some time at home and see old friends. When I returned, I noticed that Che had started approaching the guitar more seriously. He’d always played, but the new furiosity he displayed was something else. Strange far flung influences had begin creeping in. During one of our rambling conversations, I mentioned that my girlfriend and I were planning a trip to Morocco. It turned out that Che was going to Mauritania (just to its south) during the same weeks we were going to be there. We hatched a hopeful plan to connect somewhere in North Africa, but sadly it was not to be. Both of our trips had grown from a love for the music of the region, but Che’s was of a more serious sort. He was going to Mauritania to study Griot guitar techniques with Jeiche ould Chigaly, a master of the form, and husband to the incredible Noura Mint Seymali. He returned with a strange re-intonated guitar, hilarious stories of village children looking at him like he was an idiot while he traced through the Mauritanian modes, taking his guitar, shredding, making him look bad, and handing it back. He wasn’t confident that he had learned enough, but upon watching him play, it was clear that he had gained more than he was taking credit for. New worlds had been opened.

Che’s guitar being refretted in Mauritania

Though the Che and Rick had met somewhere in the Mid 2000’s, shortly before I began returning to NY, Che had started dropping in on improvised music gatherings that he and his wife Sue Garner hosted at their practice space. A deeper friendship blossomed, and the two began to collaborate. 75 Dollar Bill was born. During the first year of the band, Che disappeared. He went down the rabbit hole, stopped answering the phone, and was lost within the walls of their practice space. When I did see him, he looked exhausted, and would mumble something about a crazy time signature, and a plywood box that Rick was playing. Eventually I met the man that was putting him through the paces, and found one of the sweetest, most generous individuals I have ever encountered. If ever there was someone who should be credited with a saint-like temperament, it’s Rick.

In mid-October 2012, 75 Dollar Bill played their first show at Manhattan Inn in Greenpoint. The crowd was small, mostly made up of close friends. I’m not sure any of us knew what to expect. From the din rose one of the most striking sounds I had ever encountered. It was overwhelming. Across the audience jaws began to drop one by one. As Che traced through blistering, distorted guitar lines, Rick battered out complex rhythms from a large plywood box he was seated on. Polyrhythms rose from a collection of broken cymbals and scraps of metal collected at his feet. I had never heard anything quite like it. Everyone who walked out into the street that night, did so a dedicated fan of 75 Dollar Bill. In my social circle, despite whatever lack of objectivity you might presume, this is less common than you’d think.

Upon Che’s return from Mauritania there was an avalanche of activity. As the pallet of his playing broadened, both he and Rick were anxious to play. There were stretches where it was rare for a week to pass without the band playing at least once in the city. I went to every single one. They embarked on an extended residency at Troost and played everywhere they could, including the streets of Chinatown (you can catch a glimpse of us behind Rick and Che in the above video). What was striking was that, unlike most bands, who grow tighter and more refined as they go, 75 Dollar Bill delved down a darker path. Though it’s undeniable that they got better as they went, they refused to sit on their laurels. Without losing what made it great, their sound began to evolve and fluctuate. Elements of droney Psyche, Stoner Rock, and Modal Jazz began creeping in. Before long, everything could be called into question. They began inviting other musicians to improvise and collaborate with them on stage, and throwing strange realizations of covers into their repertoire (my favorite is a blistering rendition of Ornette Coleman’s Friends and Lovers). Nothing was predictable, it quickly became easy to lose track of who, or what, 75 Dollar Bill even was. There was no way to know what you might hear on any given evening. The sounds stretched and contracted, bleeding across genre and cultural source. Every night became an adventure.

In May of 2013, the band issued their first release. The untitled cassette is constrained to the duo, and represents the early incarnation of their sound. It was followed at regular intervals, by recordings which are stunning, and double as documents of the evolution of their approach and sound. Olives in the Ears from June 2014 is a series of collaborations, drawing from those which had begun on stage, with Sue Garner, Andrew Lafkas, and Karen Waltuch. It’s totally overwhelming.

In January of 2015 they released their first LP Wooden Bag on Other Music’s imprint. Though the recordings return to Che and Rick alone, it goes a long way to display the fruits of their labors – ripping through their challenging territory with ease. In October 2015, they followed it with Southeaster / Like Like laundry, which again represents a large ensemble made up of Cheryl Kingan, Andrew Lafkas, and Steve Maing. The sound thickened with Maing’s second guitar, pushes into distinctly avant-garde territory. For having been released over such a short period, their total discography displays a remarkable amount of diversity – yet they never lose track of themselves. It is a music which draws from each of the collective’s long history in music. It is Punk, multi-cultural, rocking, and avant-garde. There’s not much I can say to do it justice. I’ll let the music speak for itself.

75 Dollar Bill is a band that you have to see live. The recordings are great, but unlike most of the musical landscape, nothing gets close to what you hear in the room. They’re a thrilling ride, offering nearly everything that music should be. An exuberant celebration, cross-cultural discourse, adventure, surprise, and challenges. Despite my friendship with both members, I can comfortable say that they are one of the best bands going.

I’ve timed this piece with a bittersweet occurrence. The band is about to embark on their first stretch into European territories. It’s a moment I’ve waited for since they began, and sadly I won’t be there for it. It’s made that much more difficult because they’re playing in London at my old stomping ground Cafe Oto, and will be staying in the flat I lived in until two months ago. Our ghosts are dancing. If you are anywhere nearby, I highly recommend you make it out. They are a band not to be missed.

You can catch them:

I’ll follow with some photos I’ve taken over the last year to help lay the bait. I hope you enjoy, that they do the the trick, and you’ll make it out to see them for yourself. 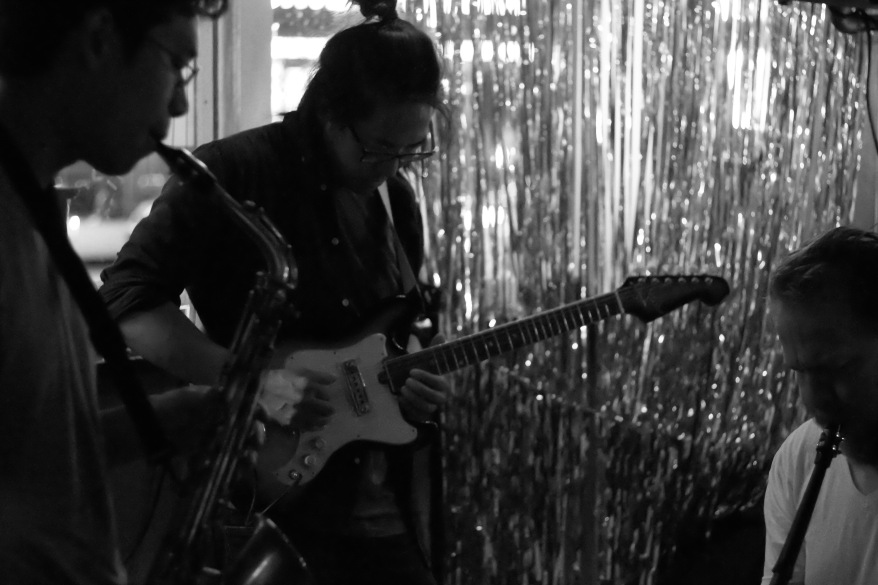 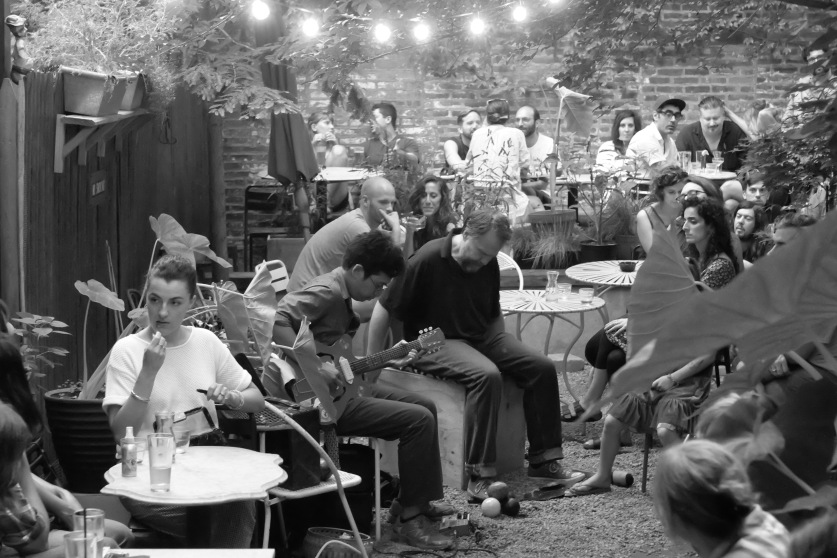 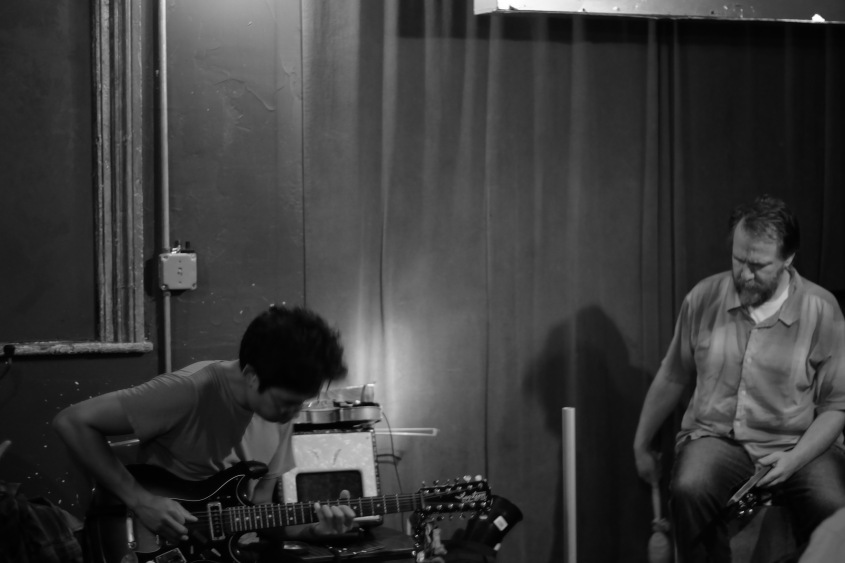 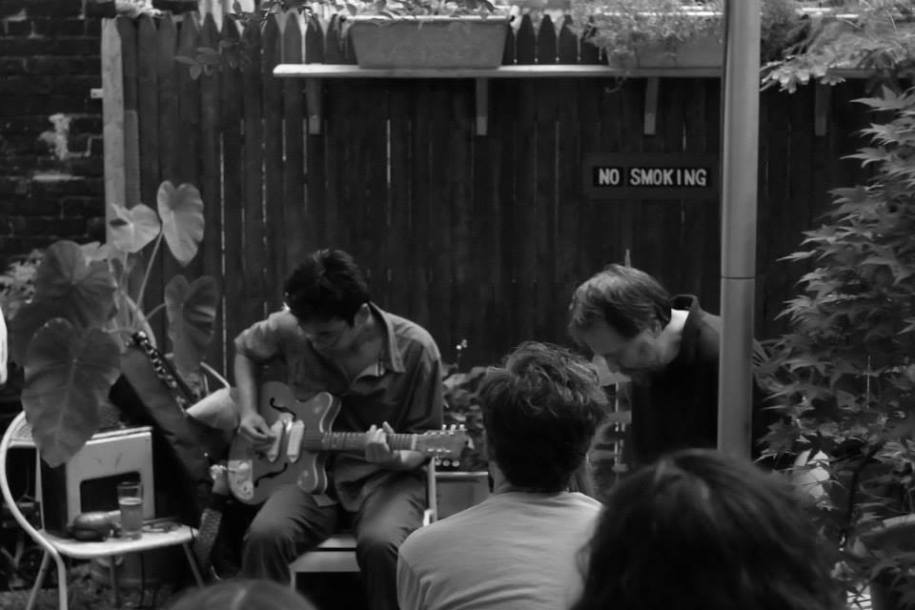 One thought on “improbable currencies (on 75 dollar bill)”