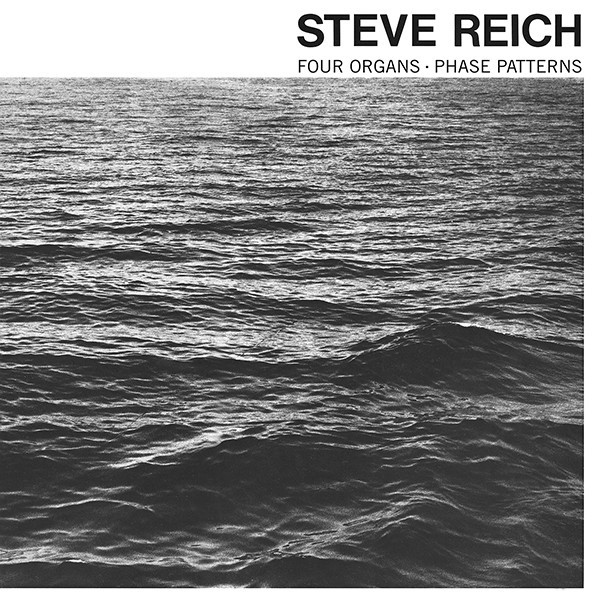 Within the history of Minimalist music, there are few documents which are equally iconic and as obscure (in their original issue) as Steve Reich’s ‎ Four Organs / Phase Patterns.  It matches Terry Riley’s In C for importance, but has remained extremely difficult to find since its original release. Though an extended version of ‎ Four Organs appeared on Angel Records in 1973, to my knowledge this album holds the only vinyl issue of Phase Patterns, making it a must for obsessives like myself.

If you’ve encountered Minimalism, you’ve probably heard Four Organs. It’s one of the most recognizable works in the canon. Pulsing organs and metronomic maracas sculpt one of the most playfully infectious works in twentieth century classical music. No mater how many times I listen to it, or how familiar with it I presume to be, I’m always transported to a world of surprise and wonder. Four Organs defines an aural space with few equivalents. It’s the laughing Buddha – of this world and part of another, serious while filled with humor, meditative and stark. While within it, consumed by tones and rhythm, the world slips away. More times than not, its conclusion, and my exit from its world, is too painful to bear. Over and over, I find myself swinging the arm back to the beginning.

Phase Patterns, though slightly less well know, is equally wonderful and important. Though overt percussion is absent, the organs fill the void. They rattle against each other like sticks on a drum falling slowly out of time. Their tonal relationships are incredibly surprising. The work is so hypnotic and engrossing that it’s almost worrying  – you might put yourself at risk listening to it in the wrong circumstance. This isn’t one for an iPod. Stay at home in safe space. The work is more stark and serious than Four Organs. It’s a more challenging listen, but yields incredibly dynamic rewards. As the organs slowly pass each other, it becomes impossible to distinguish what is what, who is who, and which is which. It’s deeply dislocating. The notes collide and bounce off each other, and call everything into question. Is this composed? Are the players going on the offensive?  It all chance? Phase? It’s easily one of my favorite Reich works, if not within the entire scope of Minimalist music.

I spent years searching for a copy of ‎ Four Organs / Phase Patterns. Eventually one happily fell into my hands. It was originally released on Shandar, one of my favorite avant-garde labels of all time, and part of the reason for its obscurity. Shandar was a French label founded and run by Chantal D’Arcy out of an art gallery in Paris. It issued roughly 25 unique releases between 1970 and 1977 by some of the most significant figures in avant-garde composition and Free-Jazz, including La Monte Young, Cecil Taylor, Albert Ayler, Terry Riley, Pandit Pran Nath, Philip Glass, Sun Ra, François Tusques, and Charlemagne Palestine, among a number of others. I’m not sure how many copies were usually pressed, but I’ve slowly collecting the labels complete discography over the years (I’m getting close), and I can confirm that none are easy to find.  In 1979 the basement of the gallery, which housed the label’s stock and recordings, flooded. Virtually everything was lost. This effectively put an end to the venture and any further availability of its releases.

I just noticed that the wonderful label Superior Viaduct, who have been doing a great job reissuing iconic records over the past few years, have announced that they will be returning Four Organs / Phase Patterns to the light. It’s out in March and a great occasion. I can’t recommend picking up a copy enough. An absolute must for anyone who is a fan of Minimalism or Reich. You can get it from them direct here, or from your local record shop when it hits the shelves. In case you’re wondering, that wonderful cover is by Micheal Snow.