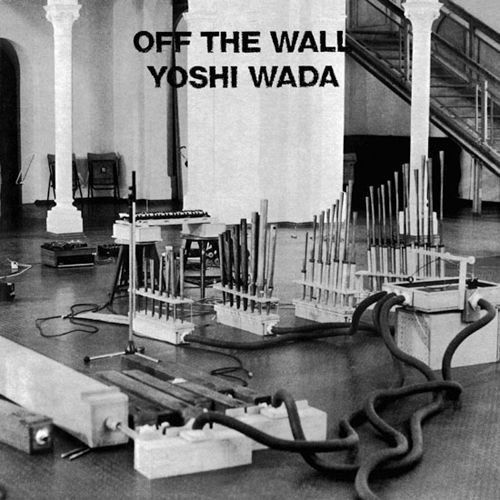 Within the canons of the avant-garde, Minimalism, and music which utilizes drone, few are greeted with the awe inspiring respect offered to Yoshi Wada. Born in Japan, but having spent the bulk of his creative life in American, in 1983 he packed up his family and moved to Berlin for an artist residency. The fruits of that stay have traveled with us through the decades – particularly through the recording Off the Wall, a towering achievement within the history of avant-garde music. Though Wada is primarily recognized as an experimental composer and instrument builder, as a member of Fluxus, his practice extends into the more complex territories of sound, performance, and sculpture. To simply understand him through the legacy of recordings does not do his work justice.

Like many of his peers, Yoshi Wada’s work came to maturity outside the accepted model of musical context – in art galleries. Fluxus was a challenge – not only to what the visual arts understood themselves to be, but in the case of artists like Wada, Tony Conrad, Henry Flynt, and La Monte Young, to what music was, as well as where and how it was to be heard and understood. While attacking these structures, they collapsed the entire paradigm of western musical thought. Not only did they introduce new sounds and sources, but they entirely rethought ideas of tonality and composition.

Through an extension of Fluxus founder George Maciunas’ hope to destroy the elitism of the art object, the movement embraced the “artifact.”  Rather than making works that catered to a moneyed elite, they preferred multiples which were affordable and accessible to anyone. Despite the thousands of artworks Fluxus created, this practice only skirted into recorded sound. If you scan the discographies of prominent members, there are only a handful of available recordings, and even less from the most active years of the movement. Rather dwell on the questions of expense or opportunity, it’s crucial to examine the practices of the artists themselves. Most Fluxus music begins as a departure from the ideas John Cage – a sometimes member of their ranks. Beyond his thoughts applied directly to composition and source – indeterminacy etc, Cage had a strong dislike for recordings of music as commercial objects. He believed them to be destructive toward the act of listening. He proposed a more active relationship to sound, feeling that it was best experienced live. Given the nature of Fluxus action, and the breadth of performative meaning proposed by its musical members, this goes a long way to explaining the slim number of recorded documents during the years where Maciunas and Cage were present among their ranks. It might be understood as philosophical imperative.

Despite the nature of practice during the 60’s and 70’s, most of us were not there. We first encountered this music in recorded form. Records were the foundation of our love. For many years (until some of these artists returned to the world of performance) it was all we had.

Yoshi Wada’s first album Lament For The Rise And Fall Of The Elephantine Crocodile wasn’t released until 1982. It was part of the legendary free jazz imprint India Navigation’s brief foray into Minimalism, also realizing LPs by Phill Niblock and Arnold Dreyblatt. During the following year the Wada moved to Berlin. His time and activity there are recounted in a wonderful interview between himself and his son Tashi in Bomb Magazine which can be read here. It was towards the end of his stay that his second and third releases were recorded. 1983 saw the cassette Die Konsonanten Pfeifen issued in an edition of 50. Off the Wall, recorded during the same period, wasn’t issued until in 1985. It would be twenty three years before his audience received another recorded document. By the time I encountered it during the 90’s, it was legendary and virtually unobtainable.

Off the Wall was originally released by the German Free-Jazz imprint FMP. Strangely it finds itself slightly more at home with its catalog (in the company of artists like Hans Reichel) than it does within Wada’s. Most of his recorded output deals with duration and constrained tones slowly crossing to generate overtones, harmonics, and atonality. Though Off the Wall does contain all these core features, its totality is another beast. The work is composed for two bagpipes, an organ, and drums. It begins as you might expect, two interlacing bagpipes shifting across one another, underlain by an organ drone. The trio create some of the most beautiful harmonic interplay I can call to mind. It’s mesmerizing. Around the seven minute mark a timpani begins to sound. The bagpipes respond with a flurry of activity. Their notes beat against each other in a barrage of rhythms and tonalities.  Structurally Off the Wall is one of the most complex of Wada’s works. Over two sides it evolves from pure harmonic drone, toward the kind of percussive repetition utilized by Steve Reich and Terry Riley, back to a more reduced state, and then off again into a spectrum of interplay more familiar to Free-Jazz. It’s absolutely wonderful.

Tashi Wada’s label Saltern which works in collaboration with Important Records, has just lovingly Off the Wall on vinyl for the first time. I recommend you run, jump, and pick it up fast. In a wonderful year that has seen the reissue of a number of historical Minimalist masterworks, this is with out a doubt one of the highlights. You can pick it up from either label direct, from Forced Exposure, or your local record shop.