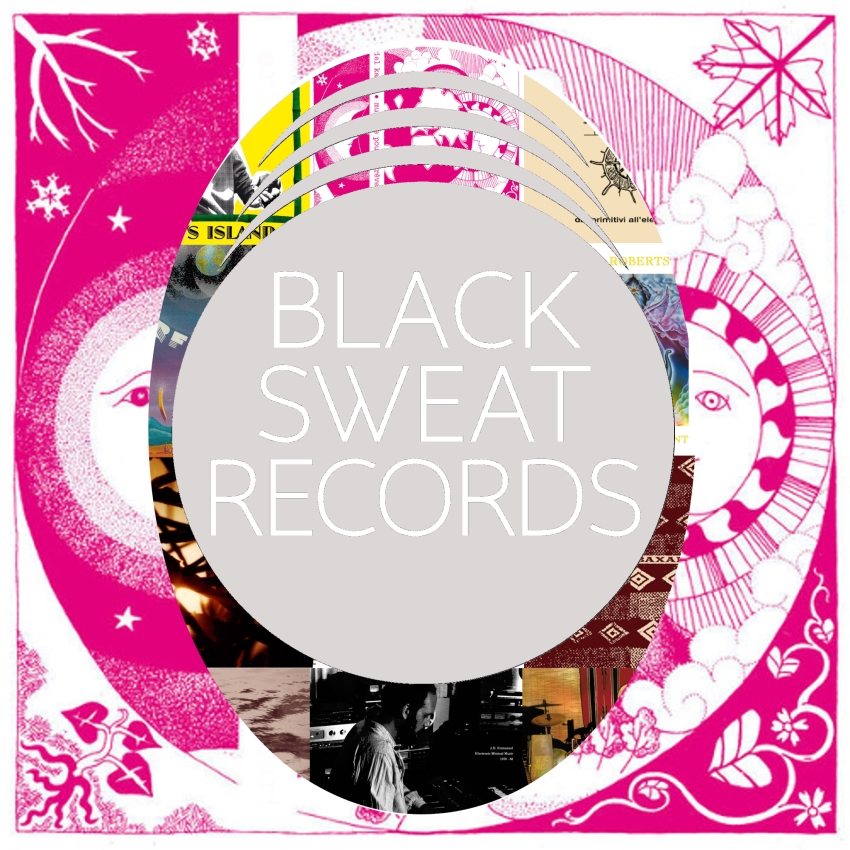 I started The Hum for a lot of reasons. It began as an attempt challenge the idiom of music writing on the internet, and to champion the efforts of the wonderful artists, labels, and shops who work tirelessly in the name of ambitious music, but are often neglected by this context. It was, and remains, a selfless gesture to give back to all the people who constantly enrich my life with wonderful sounds. What I didn’t expect was the boomerang. Over the course of the site’s life, my work has put me in touch with hundreds of wonderful people who’s efforts I have long admired. Their words have enforced my resolve, rebuilt my sense optimism, and reminded me of how many of us are kindred spirits. Nowhere has this been more true than with Black Sweat Records’ founder Davide Domenichini (Dome).

I first encountered Black Sweat when they reissued Ariel Kalma’s second LP Osmose in 2013. I’d been hunting for Kalma’s discography for years, so it was an exciting moment. Much of my early musical education drew from label loyalty. In the era before the internet, and growing up where I did, beyond the recommendations of friends it was one of the few reliable channels for discovery. When I fell in love with a band, I would methodically work my way through their label’s entire catalog. This practice has stuck with me through the years. I believe that the efforts of labels should be held in equal regard to those of their artists, which is why I kept tabs on Black Sweat. One great thing often leads to another. Though the reemergence of Osmose escaped many, their reissues of J.D. Emmanuel’s Echoes From Ancient Caves, and Ariel Kalma’s Open Like A Flute did not. In both cases I heard excited murmurings among my friends in New York before I knew they were out. These artists held cult status among fans of New-Age music, particularity because their music draws from the avant-garde and transcended all of the cliches often associated with the genre. Emmanuel’s Wizards and Kalma’s self-titled debut have long retained “holy-grail” status for many record collectors, and have been reissued in recent years, but no one had dedicated themselves to the larger body of their work. This is something to consider when examining the current climate of reissues. It’s one thing to offer a coveted long out of print release. It’s another to support the artist themselves, and this is what Black Sweat has done. Over the last few years they have released a treasure trove of neglected releases by both these artists, as a well as number of others.

Dome founded Black Sweat for all the right reasons. Like myself he grew up as part of the Punk and Hardcore scene, and developed a strong attachment to its defining DIY ethos. His reasoning was simple. He couldn’t afford many of the rare records he wished he could own, and wanted to find a way bring them to others in the same situation. This was combined with an elemental desire to support the work of many of the artists he loved, who didn’t get the attention they deserved. Though the label receives most of its accolades for reissues, it’s important to acknowledge that this is only part of its focus. Over the course of its life it has been supporting ambitious contemporary artists as much as those from other eras – including Dome’s own band Al Doum & The Faryds (who are frankly a pretty astounding adventure into psychedelic tribalism, and rapidly becoming one of my favorite bands going).

Over the last four years, Black Sweat has built a catalog marked by diversity and focus. Every new release forces me to stop and listen. Their work deserves attention, respect, and appreciation. Not only are they supporting the work of great artists, but they remind us of the joys of music, and the ethos that brought so many of us to this world. I’ve attempted to offer a broad overview of their catalog, but I encourage you to dig deep and explore its entirety. As I cast an excited eye on their future, I hope you’ll do the same. 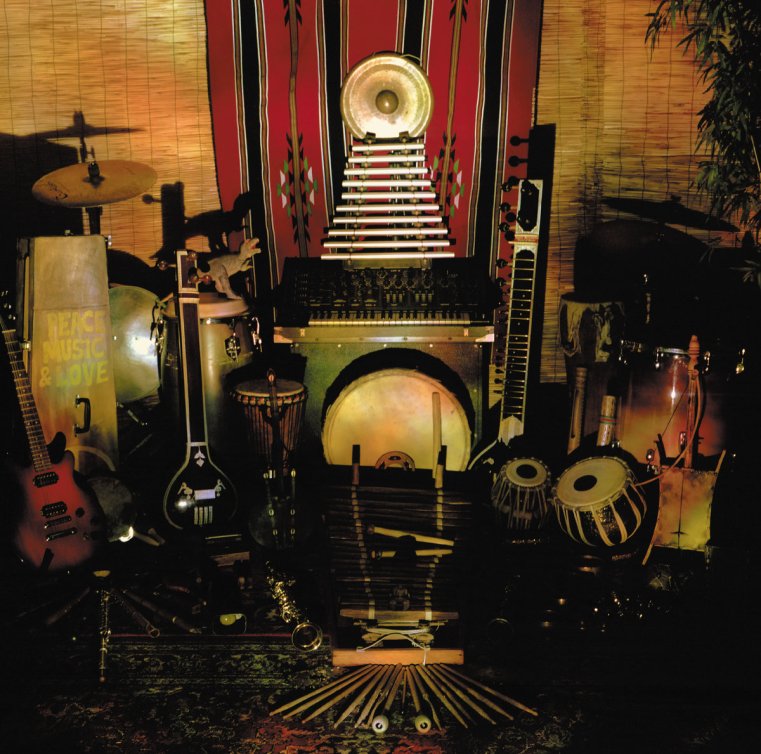 There’s a haunting experience that’s so rare, I often wonder if it’s happened. It’s the encounter with the music already playing in your head. It remains an ethereal dream, until one day there it is – that perfect thing that you thought you’d never hear. This describes my first encounter with Al Doum & The Faryds. Beyond the fact that it’s Dome’s band, I can’t tell you much. They offer little background, but the music speaks for itself. These days I rarely skirt into the territories of Rock & Roll. The genre has increasingly has abandoned its spirit of adventure. Of the few contemporary exceptions, Al Doum & The Faryds soar to top. They embody nearly everything that I thought was lost and long to hear. Risk, experiment, unpredictable influences, drugged out repetition. They sound a little bit what you’d expect International Harvester might have been, had they spent their years in North Africa rather than Sweden. In other words, my dream band. Cosmic Love is their third and most recent LP. It’s displays near perfection as the band stretches out across its duration in fluid seamless evolution. The record begins with pure percussion, drawing from diverse rhythmic traditions from around the world, before infusing them with a meandering flute, and stitching together a compositional structure that calls to mind the best moments of 70’s Spiritual Jazz. As it evolves, it shifts towards passages of Krautrock inspired bass lines, tinged with psychedelic guitar jams, before chantey Spiritual Jazz inspired vocals usher us back toward a series of rhythmic experiments which evolve into early Hawkwind inspired freakouts. It’s impossible to do justice. Cosmic Love is an album which continuously shakes off the burden of categorization, and no mater how many times I listen to it, it never fails to yield surprise and adventure. I recommend listening below and picking up a copy before they’re gone. 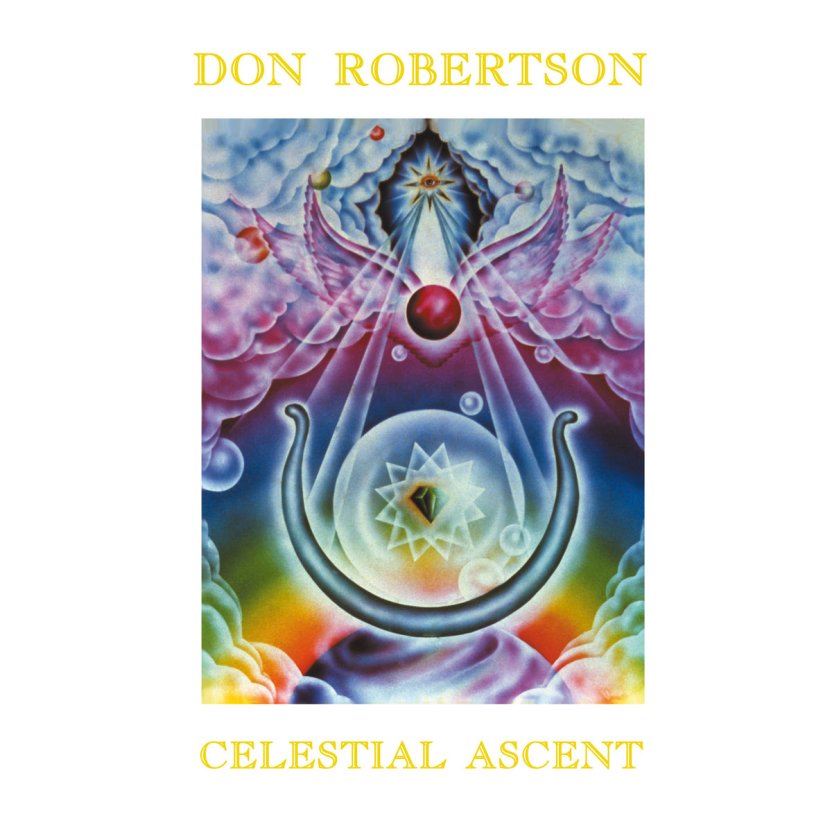 I’m a huge fan of Don Robertson’s first record Dawn. Until Black Sweat reissued his second LP (originally appearing as a self-issued cassette after an eleven year silence) I thought it was a lone gesture. I was wrong. Dawn is a pretty wild sonic adventure. It’s one of those rare records from the 60’s that bridges popular culture, the counterculture, experimental music, and diverse musical traditions from around the globe, without feeling self-conscious. It’s is a masterpiece. Celestial Ascent is a New Age record in the purest sense of the word. It presents a more serene and restrained Robertson playing a 45-string Zither, rather than the diverse palette of Dawn. Despite the noticeable differences in sound, and the generalization a cursory listen might lead you to, the connection between the records lays beneath the surface. Celestial Ascent is equally one thing as it is another. Bubbling below its gentle passages are structures, harmonics, and overtones that are deeply linked to the traditions that inspired his first release. I won’t call it something that it’s not. It’s New Age, but it brings its listeners into a far richer world than most, and toys with reference (particularly to the practice of santoor playing within Indian Classical music) and complexity that few could reach. Whether you are a seasoned listener, or just wadding into these waters, the record speaks for itself. Have a listen below. 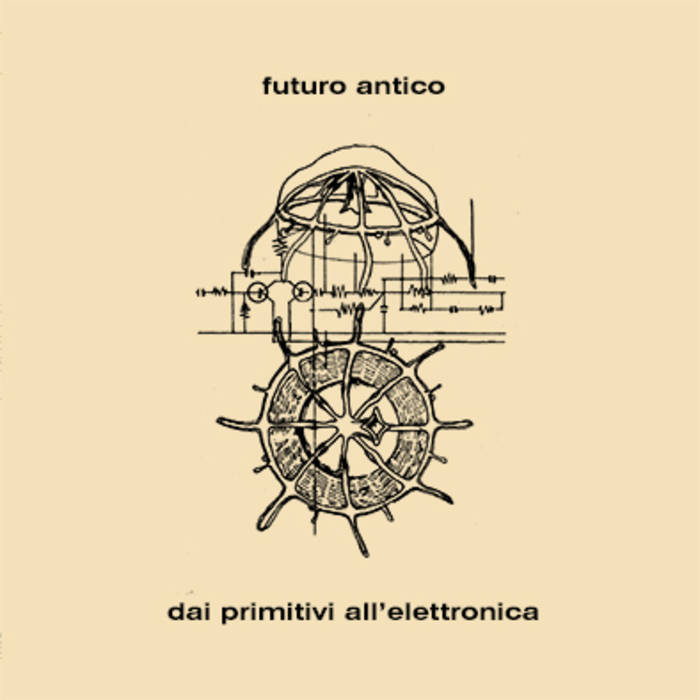 Futuro Antico is one of my favorite expressions of Italian avant-garde music from the 70’s and 80’s. They were Gabin Dabiré, Riccardo Sinigaglia, and Walter Maioli. The group self-released a small number of cassettes during the early 1980’s before fading from view. Dai Primitivi All’Elettronica was recorded in 1980. It is the second of the band’s releases that Black Sweat has brought back into the light – the first of which I covered in my piece The Obscure Brilliance of Italian Minimalism (In Nine Albums). Futuro Antico was conceived by the artists as “D’ai primitivi all’elettronica” (Of primitive electronics) – a means to combine avant-garde ideas and electronic music with instruments and compositional techniques from diverse ethnic traditions. Like all of the band’s releases, Dai Primitivi All’Elettronica is absolutely incredible. Drawing equally on Indian Classical music and a number of western avant-garde traditions, it is discreet and intent on taking its time, with each passage slowly evolving and unfolding. Drifting stretches of synthesizer are interlaced with, piano, flute and diverse instruments from around the world – feeling halfway between a hippie jam and the music of the future. My fingers are crossed that Black Sweat has plans to issue the group’s remaining discography. For now listen below. You won’t disappointed. 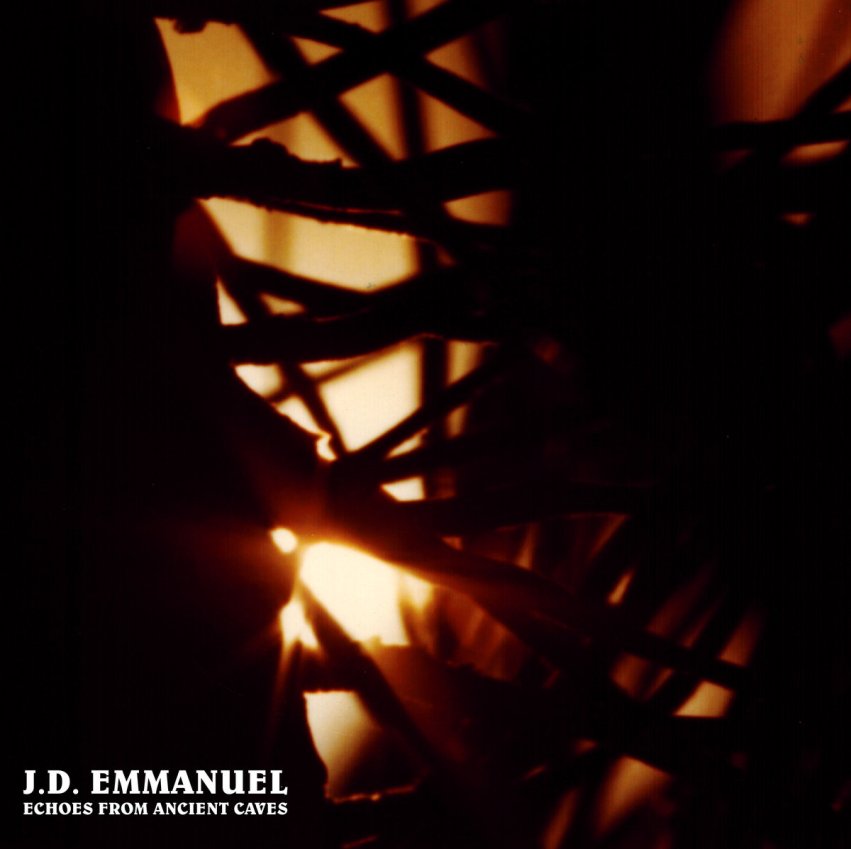 My discovery of J.D. Emmanuel forced me to embark on a wide reaching reconsideration of the stigmas applied to New Age music. Though I had maintained a relationship with this world since I was a teenager, his record Wizards was a revelation (I own both the LP and cassette issues). Emmanuel transcends the expectations of New Age to such a degree that it becomes impossible to categorize him. I understand why he retains the associations he does, but it’s an easy default. When housed in our contemporary context, and divorced from its own, Echoes From Ancient Caves reveals itself as a laid back, dreamy experimental record – sounding like the meandering synthesizer adventures of a stoned genius. Recorded in the same rough period as Wizards and his first album Rain Forest Music, it overlaps with both records in many areas, but also departs from their more defined structures and Minimalist influences. Echoes From Ancient Caves, though at times less successful, is a more adventurous record, and should be appreciated as such. It’s more open, and takes a greater number of risks – feeling like Emmanuel is inviting us into a passing moment of his day and allowing chance to dictate what reaches our ears. It’s a wonderful journey into the sounds of a brilliant man. Though I recommend his entire catalog, this is a fantastic place to start. 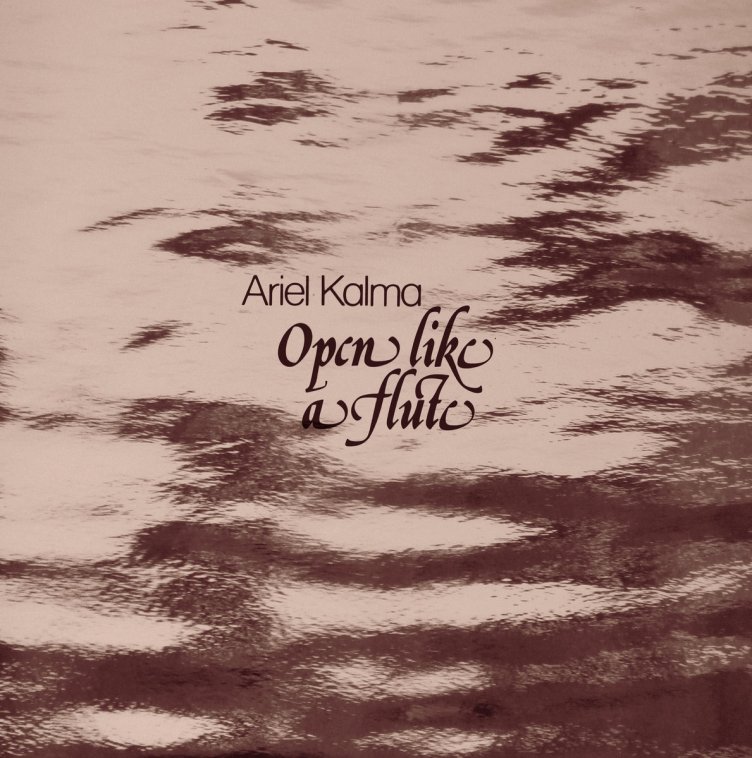 As I mentioned at the outset, it was my love for Ariel Kalma that drew me to Black Sweat. Like J.D. Emmanuel, he helps redefine our easy categorizations of “New Age” music. Trained on the Saxophone, but always interested in Non-Western and alternative approaches, Kalma learned circular breathing from a snake charmer in India, and began to incorporate the technique into his use of long delay electronics during the Mid-70’s. These developments slowly evolved into the music we have before us. Though Kalma is firmly grounded in New Age thinking – hoping his music will offer listeners a “mind cleanse,” his connections to the avant-garde are much more present than most of his peers. They thread themselves through everything he touches. The fact that he worked with a number of artists from Groupe de Recherches Musicales, as well as in the studio itself, starts to untangle some of the mystery. Open Like A Flute is an incredible journey, laden with drone, synthesis, countless instruments from around the world, and most importantly, striking and challenging composition. It is unlike anything I can call to mind within this world. It’s proximity is far closer to those of Terry Riley, La Monte Young, and Jon Hassell. Despite these connection and associations, Kalma quickly shakes free, sculpting a world entirely his own. His is less beholden to ideas, feeling far more connected and responsive to music itself – almost as though it has self-generated. Rhythms, overtones, and complex structures bridge the worlds of the avant-garde, Minimalism, and New Age thinking. Open Like A Flute is a near perfect gesture. It’s easily one of my favorite records in the Black Sweat catalog, and I can’t recommend it enough.