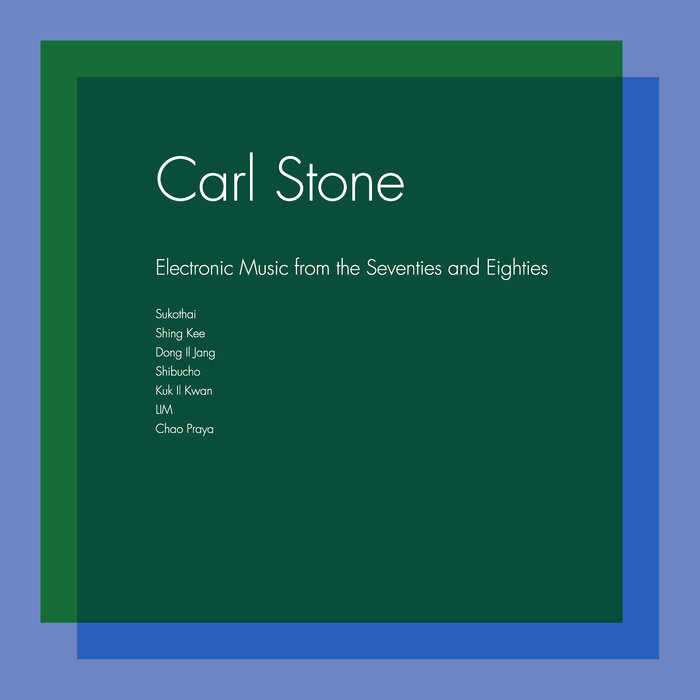 Carl Stone – Electronic Music From the Seventies and Eighties (2016)

Years ago, a sculptor I know was approached by a scientist attempting to develop non-petroleum based plastics. He had reached the trial stage of his research, and explained that in his experience, the demands made on materials by artists were so strenuous and unpredictable, that they represented the best test group. In other words, if they could survive an art work, they could survive anywhere. It was an idea that I had never considered – making me address the history of relationships between creative practice and technology in a new light.

Few of us would have the creative platforms that we do without the involvement of some form of technology, but for most of history, it was seen as a means to an end – utilized by the arts to improve its output. During the industrial age, the relationship increasingly shifted toward a more balanced equilibrium. Technology enabled new art forms (both conceptually and practically), while the needs and proposals of the arts, regularly pushed technology forward. The painter, Fernand Leger, once described Cubism’s connection to the interface of technology with daily life. He noted that looking out of the window of a car or train compressed what might take minutes to observe on foot, into a single second. His work set out to capture this new visual temporarily. During roughly the same era, countless artists found themselves inspired by these ideas, and waded into the new fields of film, photography, and sound recording – contributing unexpected ideas and demands which pushed the mediums and their technologies forward.

The Twentieth Century was defined by unparalleled creative and technological advancement. Across its breadth, we encounter radical paradigm shifts, at regular intervals, divided by only a few short years. The early Twenty-First seems to indicate that the momentum has slowed. We often take technology for granted, or cast it with a cynical view. We’ve come to expect familiarity from the arts, rather than a challenge to the world we know. It’s important, when observing the articles of the past, to remember the spirit in which they were made – to avoid coloring them with the temperaments and ideas of our own time. The sciences and the arts of the Modernist era (which, accepting different views on the definition of Post-Modernism, encompassed most, if not all of the Twentieth Century) were characterized by a great deal of optimism – if not outright utopian idealism. They were seen to be enablers of intellectual and practical freedom, bound and working together for the greater good. Progress was everything. Most avant-garde and experimental sonorities of this era, with the practices from which they grew, hoped to deliver this spirit to audiences large and small. This is important to remember when approaching the work of Carl Stone. It is progressive, non-hermetic, filled with ideas and optimism – in open discourse with the world beyond.

Twentieth Century avant-garde and experimental music is impossible to untangle from technological advancement. It’s everywhere. The great enabler of the sounds of Dada and Futurism, Musique concrète, Musique Stochastique, electronic and electroacoustic music, the ideas of Cage and Stockhausen, and the developing practices and approaches of nearly every composer, musician, and artist working in the field. Even in the cases where new technologies were not explicitly employed, their influence was close at hand. Carl Stone entered this discourse during a fascinating period. He studied composition with Morton Subotnick and James Tenney at CalArts, but was quick to shift toward electroacoustic research. His earliest works in the field were largely dedicated to pure electronic sound, generated by modular synthesizers – represented within Electronic Music From the Seventies and Eighties by Lim (1974) and Chao Praya (1973), created on the Buchla 200. Though both are brilliant droning constructions, which most likely listeners will find the easiest within the set to access, they are yet to indicate the conceptual arc which would guide the composer’s career. During his time at CalArts, Stone was tasked with the job of transferring thousands of LPs from the university’s music library to tape (for preservation purposes). As he worked, he realized that he could manipulate the results in real time without effecting the final recording (I assume by tapping a secondary output), and set out to make better use of his work-study time by building a series of complex sound collages from these existing sources. In the process, he created a body of work which was unlike anything heard before.

The non-hermetic character of Carl Stone’s music extends into both context and source. Though tape experiments, manipulation, and looping were nothing new at the time he came to them, he was among the first to focus on material which he did not record himself (there are of course earlier examples, but nothing quite like this), and to draw from such a broad range of recordings. His choice of raw material, and his manipulation of it, strove to break associations and signifiers embedded in the avant-garde. His ideas anticipate a paradigm which has come to dominate creative consciousness –  sampling, appropriation, reference, and structuralism. Our contemporary context largely bows to the belief that nothing can be new, and that progress is best instigated by mining and manipulating the past. Stone was among the first to put these ideas into play. Not only does he foreshadow new ways of thinking within experimental music, but also for all of popular culture.

I’ve been aware of Stone’s work for a number of years. As with many of my discoveries, my first encounter with the composer owes its debt to the remarkable efforts of the label which housed his work  – in this case Unseen Worlds. In 2008, they reissued his 1983 album Woo Lae Oak. It was originally released on Joan La Barbara’s Wizard Records. Though a longtime fan of Barbara and the label, I had missed the fact that she had issued the work of other artists (there were only two, Stone and Bruce Ditmas). The shock gave way to excitement as I settled into my first listen – the record is a remarkable and unsung triumph in the history of Minimalism. I’ve followed Stone and Unseen Worlds with anxious anticipation ever since. With Electronic Music From the Seventies and Eighties, the pair has done it again. Over the course of three LPs, we enter two fairly unknown periods of Stone’s career – the one which proceeds Woo Lae Oak, and the one between it’s issue and 1989’s Four Pieces. Though many of these works have seen the light of day –  Shibucho (1984) and Dong Il Jang (1982) represented the two sides of a 1991 cassette issued by Electro-Acoustic Music, Shing Kee appeared on both Four Pieces and 1992’s Mom’s, and Kuk Il Kwan appeared on the SoundViews Volume One cassette compilation, all are extremely rare, and have never been gathered together in a way that allows them to converse with each other. Previously, they could only be viewed as fragmentary anomalies in Stone’s discography, rather than as elements within a focused practice which extends over many years. With the exception of Lim and Chao Praya, the two works of synthesis which foreshadow the Minimalism of Woo Lae Oak, the entire set took me by surprise. These works are raw, jarring, and extremely exciting. They represent the beginning of the last great conjoined push of technology and the avant-garde during the Twentieth Century – embracing synthesis, processing, computer applications, sampling, and the direct results of the practice which grew from Stone’s experiments while working in the sound library during his time at CalArts. Though you could argue that nearly all of his work draws on discoveries made during this period, it is rare to encounter his sounds, thoughts, sources, and process so exposed – filling the collection with invaluable insight into the practice of one of the most important contributors to the cannon of experimental music.

As a rule, I try to avoid detailed description. It’s easy enough to listen to samples and come to your own conclusion. It also seems unnecessary in an era of equal access. I prefer to not risk coloring the thrill of that first listen. In the case of Carl Stone’s Electronic Music From the Seventies and Eighties, I make a rare exception because of their singularity and under-recognized place in history – but limit myself to three of the collection’s eight compositions. This shouldn’t be taken as a statement of preference – these works are incredible from start to finish.

The release begins with Sukothai, a work from 1977. My heart sank when the first notes of a harpsichord rang out. The instrument provokes an unequaled reaction in me. I’m not sure why, but it’s like fingernails on a chalkboard. My faith in Stone and Unseen Worlds pushed me on. I entered the set cold – preferring to let my heart and ears lead me (rather than the liner notes, which I later discovered to be fantastic). I had no idea what I was walking into. These were early works. Though it seemed doubtful, for all knew Stone had made secret recordings based on Baroque music. As the work progressed, my fear eased into exhilaration. Sukothai is a sound collage with 1024 layers, built from a single source – a recording of the harpsichord. It grows from faithful representation, toward a writhing chaotic sea of sound, until it progressively becomes so complex that it evolves into one of the most beautiful drones imaginable – almost as if Charlemagne Palestine had composed for a player piano working faster than the speed of light. It’s an astounding work, and to my knowledge the first of its kind.  Dong Il Jang (1982) – the collection’s third track completely knocked me over. It’s incredible – sonically to the coming digital era, what Steve Reich’s It’s Gonna Rain is to the analog. It was recorded the same year the CD debuted, anticipating sounds we all know too well (and eluding to an aesthetic yet to be pioneered by Yasunao Tone, Nicolas Collins, and others) – skipping and skittering micro-loops. Remarkably, it was created on an early analog sampler. It’s prescience and achievement is mind boggling. The biggest double take within the collection comes with 1981’s Kuk IL Kwan – the first document of Stone’s use of the sampler we encounter on Dong Il Jang. The work sounds so ahead of its time – remarkably similar to countless laptop works by a number of artists from the late 90’s and early 2000’s, that I was sure that he had slipped in a later work for good measure. I was wrong. It’s a processed sound collage built from a series of sampled field recording – a near half-hour journey into textured fragments of sound and punctuation forced into company. It’s beautiful, challenging, and mind numbing to think how quickly Stone arrived somewhere that it would take others nearly two decades to reach.

Stone’s Electronic Music From the Seventies and Eighties is a missing link, not only in the history of avant-garde and electronic music, but within the entire body of arranged sound (popular or otherwise). As Leger’s realization of Cubism was to the visual, these works become a metaphor of the contemporary operation of sound. We are saturated with chaos, barraged with an ever present, but uncountable of number sources – each vying for a place in the world. This is the fruit and consequence of a technological age. This is that sound encountered at a crucial point in history – the tipping point between the optimism of exploration and progress which defined the High-Modern spirit, and the fatigue, saturation, inward reflection, and slowing which marks our own. The collection is out now digitally. The three LP set is available for pre-order, and I’m told it will be ready in the coming weeks. You can order it directly from Unseen Worlds, and check out a sample below. I highly recommend you do, and check out the rest of the label’s incredible catalog while you’re at it.