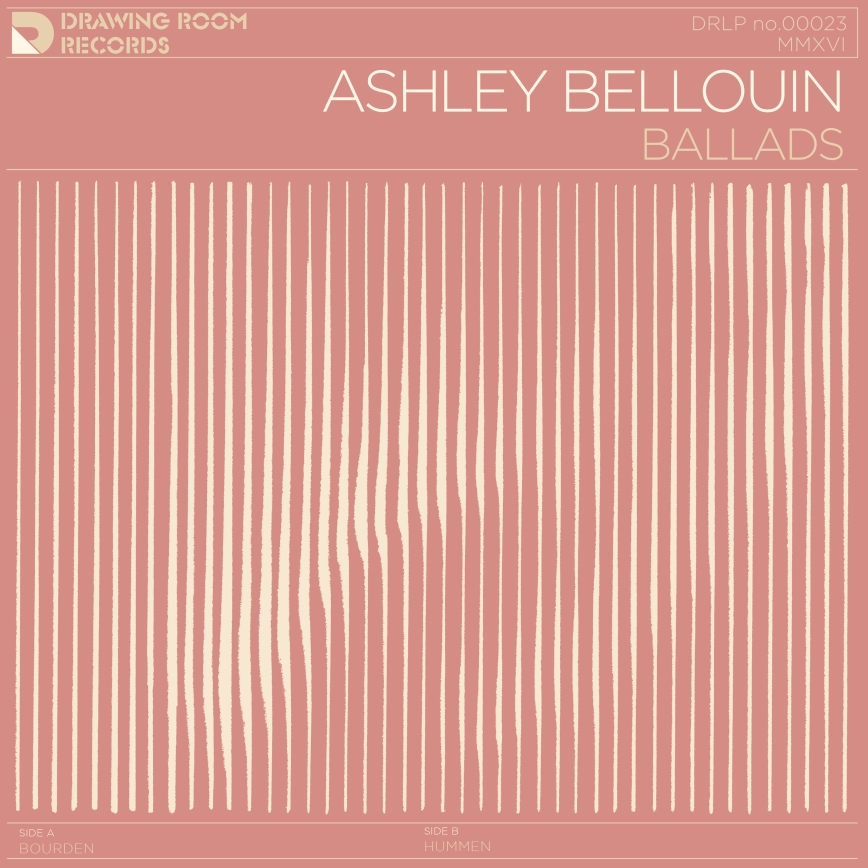 There are encounters which steal the air from your lungs – the voice from your throat – which are so inexplicably moving, perfect, and compelling, that the greatest tragedy would be doing them a disservice with words. Ashley Bellouin’s debut album Ballads, which emerged just over a week ago on Drawing Room Records, is one such case.

It has been an amazing year for recorded music – one after the other, we’ve been gifted sonic marvels (both reissues and new releases) from every corner of the avant-garde. Against these odds, Ballads rises as one of the year’s crowning jewels. It is an album of undeniable power – built from elements so discrete that they seem to have been chosen for their ability to deny importance or source. It is a work, within which there is no singularity – only the collective whole.

Ballads is one of the most beautiful, consuming, and challenging works I’ve heard all year. I can feel it creeping into the future – leaving an imprint on the rest of my days. It presents itself as a living thing – occupying the faceless ether of the arts – outside of any need to categorize of define. A discrete world  – both transcendent and grounding, like memories from the womb.

Bellouin’s effort presented me with a difficult critical challenge. For decades, progressive concerns addressing gender have largely reacted to outside pressure – promoting a distinct social position in an effort to balance the scales of an overwhelming masculine paradigm. Within this, and through the politic of Feminism, we have collectively created an orthodoxy of structures and terms in our attempt to achieve equality – to strike a fair balance within the voices and positions we represent and promote. I have no argument with any of this. I actively engage, participate with, and support it. Unfortunately, the standing social and political architectures, which seek to support, promote, and protect the voices of women, generally fail to highlight, particularly within the arts and intellectual fields, that women hold the keys to doors which men cannot access – to a world which springs to life, whose depths are plumbed and beauty possessed, by women alone.

As saying goes, politics is the art of compromise, but compromise often allows us to avoid facing (or speaking) certain truths. If we strive to recognize that women can enter and occupy creative realms which men cannot explore without them, we naturally feel inclined toward the democratic impulse of seeking and highlighting the same for men. Doing so could undermine years of struggle for equal voice within an assertively masculine social and cultural paradigm. It’s a Pandora’s Box, which seems easier to avoid than open. Because of it, we rarely speak the truth, or acknowledge the actual character, of our greatest feminine voices.

What I am describing is elusive and ethereal. It has no form or explicit character. It is a guiding force, lingering behind and seeping through the walls. It needs no words – it simply is. Collectively it sculpts a world within which I feel the most at home – the most rewarded and challenged. It isn’t something explicitly feminine – rather an honesty and course of investigation, coupled with an approach toward creation, which women embrace alone. Bellouin’s world, though entirely her own, is equally one which I entered through the work of many artists who have occupied a central place in my life – Éliane Radigue, Pauline Oliveros, Agnes Martin, Mary Heilmann, Jocy de Oliveira, Hanne Darboven, Christina Kubisch, Ellen Fullman. The list is endlessly long, but in every case – within each practice, I am faced with the overwhelming truth that what I am offered – the ideas, the rewards, the depths, could have come to be in the hands of a woman alone.

This is the realm of Ballads. It is so stunning, so consuming, so overwhelmingly sensitive, and of such a specific character, that it would do it a disservice to say that it is the work of a brilliant young artist. It is a thing which could not have been what it is – plumb the depths it does, if that artist was not a women.

Ballads departs from some of the groundwork laid by both Éliane Radigue and  Pauline Oliveros – drawing on the sonic potential of constrained harmonic relationships, and as such, is a very specific realization of Minimalism. What makes Bellouin’s practice so remarkable, and its results so striking, is the character of her limitation. Most artists who swim these pools, begin (and often remain) with constraint imposed on source – on the pallet of sound as much as their discrete relationships. As with Agnes Martin’s focus on the vast potential within the color of white, (until recent years) Radigue has rarely ventured beyond the sonorities of her ARP 2500, Oliveros dedicated years to exploring accordion and voice, and Ellen Fullman to the potential of her long-stringed instrument. Bellouin does away with this – building her world of relationships from synthesizers and a vast array of instruments, many of which she has built herself. Her sonic expanse, and I expect the challenges it imposed, have yielded a remarkable world. Within it relationships express the humanity of discourse – rising and falling, each element expressing unique beauty and potential – its own being, while seeking common ground – a place where the truth of their meaning is activated by the whole. It is a stunning work of harmonic interplay – a metaphor of our collective self.

Ballads is impossible to describe. There are its tones, sources, structures, and relationships, but no words for its totality – for what these things become, when joined. It’s two works, Bourden and Hummen, present worlds which have no end to their depths – where generosity is the primary force. This is one of the great records of the year, and perhaps many to come – a holistic shimmering world of sonorous warmth. I expect its creator will become one of our great voices, in the years to come. I can’t recommend this one enough. You can check it out below, and pick it up directly from Drawing Room or a record store near you.

3 thoughts on “on ashley bellouin’s ballads”