Magazine advertisement for Moondog’s Improvisations At A Jazz Concert (1953)

Louis Thomas Hardin, widely known as Moondog, was one of the great visionaries of 20th Century music. Beginning his creative life humbly during the mid 1940’s as a street musician orbiting around Midtown Manhattan (and later Greenwich Village), his efforts went on to have wide-reaching influence within the bohemian musical avant-garde which emerged in New York during the 1950’s and 60’s – particularity among the young group of composers who form the core of the Minimalist movement – Philip Glass, Steve Reich, Terry Riley, etc. His presence in the narrative in American creative life has sweeping importance, but is not without its difficulty. Moondog’s life, career, and work are windows into the complex legacies of negotiating the past – of our willingness to embrace only the most convenient truths, and the word of others.

For fans of avant-garde music, Moondog is a household name – so much so, that when considering this piece, I wondered if there was much that needed to be said. His music and image – the minimal polyrhythmic compositions, made by a wild proto-hippie viking, are almost universally known and loved, but considering Moondog’s music and image, against the man and his legacy, are two very different things. The composer’s enduring presence in our lives, opens a window into the many ways history is obscured before our eyes.

Many years ago, while reading the poet Diane di Prima’s wonderful Recollections of My Life as a Woman – a memoir of her years as a member of New York’s bohemian intellectual circles, I was surprised to encounter descriptions of a way of life, embraced by many during the 1940’s, which far more closely resembled what we might picture of a late 1960’s or 1970’s squat or commune. What she recounted undermined the standard narrative of the American counterculture – placing unheard of figures at its vanguard, decades before those familiar names who are generally credited. This curious fact was later furthered by reading about the lives of Harry Smith, Philip Lamantia, Angus and Hetty Maclise, and a number of other neglected figures, leafing through Wallace Berman’s photographs, watching Jonas Mekas’ remarkable eight hour saga of the 1960’s – Walden, Jack Smith’s Flaming Creatures, and other film artifacts from the period. Before these encounters, I presumed to be in possession of an extensive knowledge of the history of the American Post-War counterculture. It turned out that nearly everything I had read – at least within biographical and historical texts, was often inaccurate and rarely credited appropriately – part of orthodoxy formed to serve prominent figures, most often linked to some form of commerce. Though I maintain a great love for most of the figures who hold the dominant placeholders in the standard histories, it is also important to form an accurate vision of the past – of the development of certain threads of thought, being, and action, and how they link across generations. Moondog’s legacy contributes to this. His presence in American intellectual life, not only shed light on a path of nonconformity for those who followed in his wake, but retrospectively offers insight into creative realizations of dissent as they passed through the years – particularity because he entered the public eye in the 1940’s, far earlier than other figures of a similar social and cultural position. Unlike what history generally suggests, he is an indication of a larger body of being (and creative development), rather than a singular eccentric anomaly.

Beyond its presence as a marker for a particular social position, Moondog’s legacy is deeply complex. His music, when considering its quality, innovation, and influence, can be seen to be greatly overlooked by the Classical canon to which it belongs. As such, his output (and the way it is regarded) offers a window into some of the systemic neglect and injustice perpetrated by those who form canonical recognition within the arts (and a need to constantly question and reevaluate it) – though to be fair, some of this might be forgiven by the fact that Moondog’s music is so strikingly singular, that it is difficult to categorize and establish the kind of tangible associations and links that historians tend to rely on. It naturally defies the tradition which it contributed to. There is nothing like it, before or since.

On the other hand, we must face the composer as an autonomous individual – and here, by all accounts, he was nothing short of difficult to define. Despite appearances, and the progressive character of his music, Moondog was deeply conservative – creatively, politically, and intellectually. Impressions differ. Some found him to be generous and caring, others angry and contentious, with little concern for anyone beyond himself. Personal relationships and interactions aside, he was know to be vocally racist and anti-Semitic, which makes facing his legacy incredibly difficult. His pronouncements on these subjects are unforgivable, and because of their vile nature, force us to place him, like other great minds who held similar beliefs – Wagner, Celine, Heidegger, Hamsun, etc, into the the nearly unnavigable canon of artists whose work must be approached separately from the character of the maker. Questions surrounding the ethics of facing such individuals (against their work), occupied a great swath of Post-War intellectual life. What do you do with, and how do you evaluate, something which is profoundly beautiful – of great intellectual importance, when it is made by an person who is defined by reprehensible beliefs or actions? I don’t have the answer. There may be none to be had, but I feel compelled to draw attention to the fact that Moondog has largely escaped criticism for his beliefs. They are rarely spoken of, and seem to have been actively hidden from view (in most cases). I would venture that such an obscuring, is as unethical as the composer’s regard for others. Though he was not a member, collaborator, or facilitator of an oppressive genocidal regime – as most of the above mentioned figures were, he still must be accountable for his statements and beliefs. In the face of them, each listener must be allowed to navigate and decide on the relationship they choose to have with him. Though his sins are not as deep as Celine, Heidegger, or Hamsun, falling closer to the conundrum of Wagner, his work is more difficult to separate from the man, because his image – the viking, is inextricably linked to the legacy of his music. It is difficult to hear it, without envisioning him. As such, we must face who that man was. 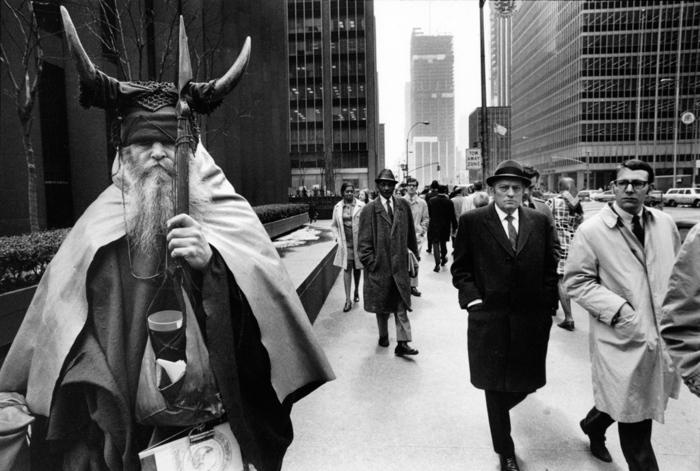 Moondog on the Streets of NY

Moondog began playing drums at a young age, and was drawn to the rhythms of the Arapaho and Blackfoot tribes in his native Wyoming, both before and after studying formal composition. Most credit Native American music as having been the primary inspiration for his sonic innovations – which highlights a strange paradox within his pronounced racism. Following the loss of his sight in a farming accident at the age of 16, Moondog suffered a deep fracture of faith which defined his entire life. He came to believe that Christianity, and other Western religions, were a source of evil in the world, and devoted himself to the ancient Nordic spiritual beliefs. This is the entomology of his viking image. It was not a clever means to gain attention, but rather an active rejection of the entire structure of Western belief and way of life. Though his devotion to paganism is generally credited for his migration to Germany during the mid 1970’s, it’s hard not to wonder (given that he did not choose Scandinavia) if the darker sentiments of that country’s history held some appeal for the composer. I doubt we’ll ever know for sure, but it must be considered when facing both the man and his music. 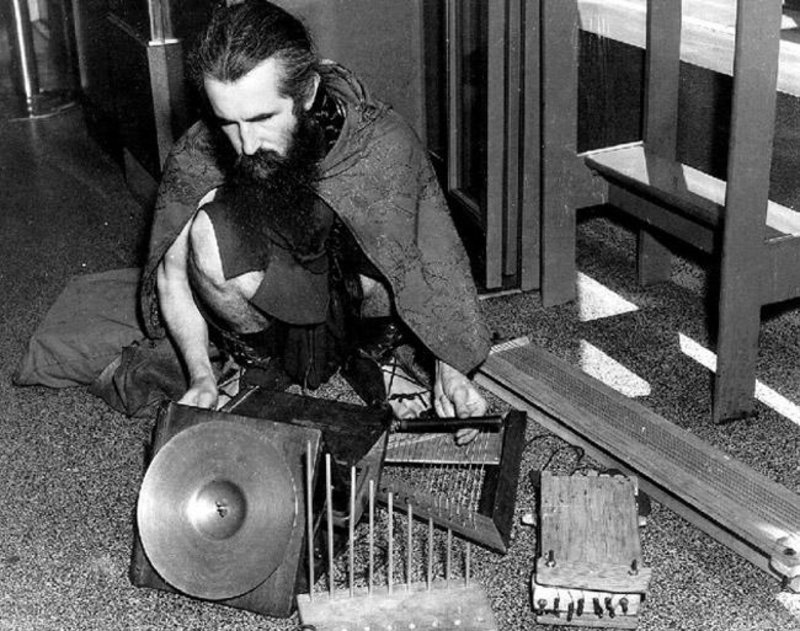 My love of the sounds and structures Moondog created runs deep. They have been part of my life, opening doors, for decades – long before I knew anything about their maker. They are wonderful. Like the work of Celine and Heidegger, they played a central role in the man I became, but are similarly linked and stained by the sad truths of the individual. Moondog made remarkable contributions to the world, but was (at least in part) defined by vile and unforgivable characteristics as a man. He represents a complex dichotomy – art vs maker. Philip Glass and Steve Reich, both of whom are Jewish and were aware of the composer’s beliefs, were able to forgive him and forge friendships with him. Perhaps this offers some indication how we should all treat his legacy – aware, and forgiving. They knew him personally. I did not. In the end, such complex relationships are up to each of us to decide on our own terms, based on the information we have at hand.

In that light, this is what I strive to do – offer information to navigate. Within such a case, I have no answers. Moondog’s music has profound importance – even if avoided for ethical reasons, it cannot be fully ignored. It is stunningly beautiful and historically significant. I adore it, while condemning the vile racism and antisemitism of its maker.

Over the past months, I have gathered a number of artifacts – press clippings, photos, advertisements, and magazine articles, drawing on a number of sources, in order to stitch together a cursory image of Moondog’s life and career. In the spirit of sharing, I leave then to you.

Advertisement for the release of Moondog (1969) 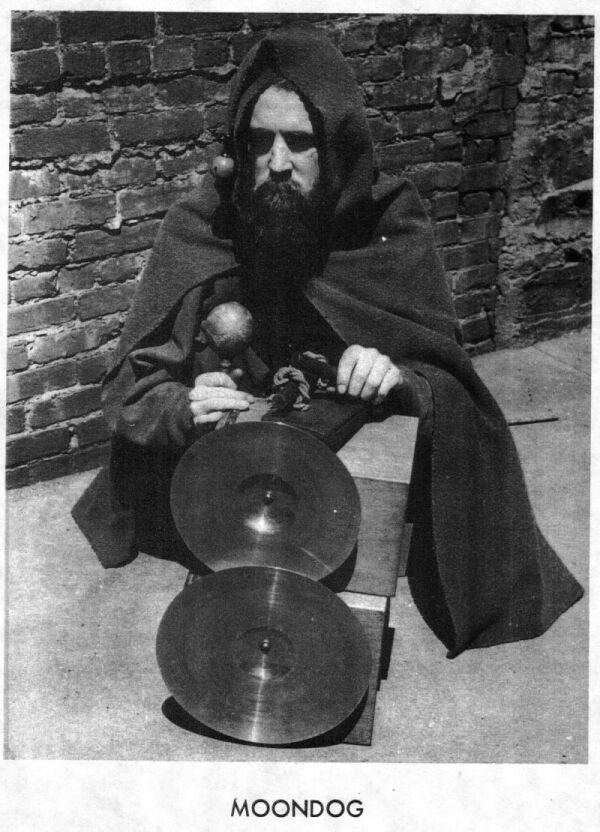 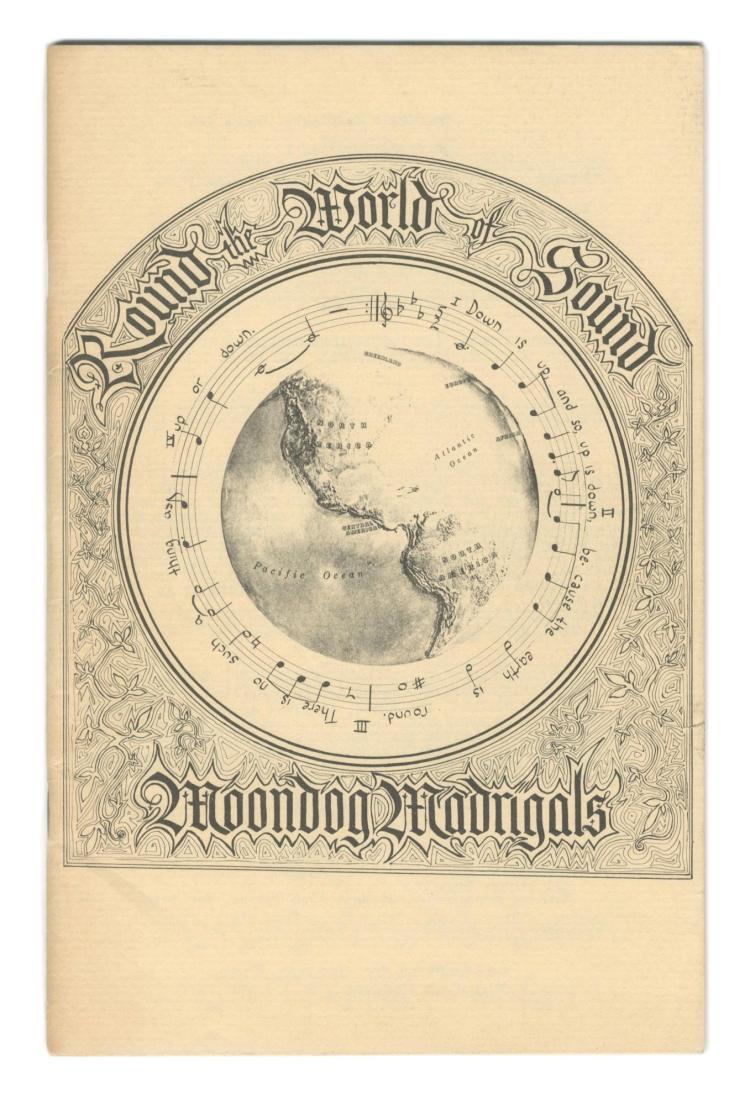 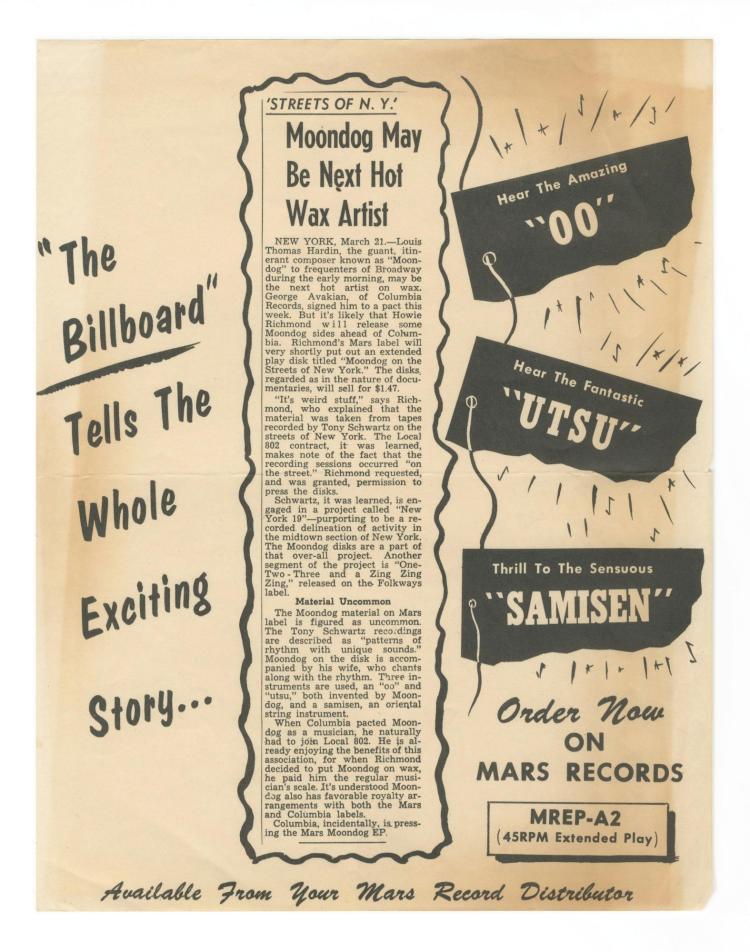 Magazine Advertisement for On The Streets Of New York ‎(1953) 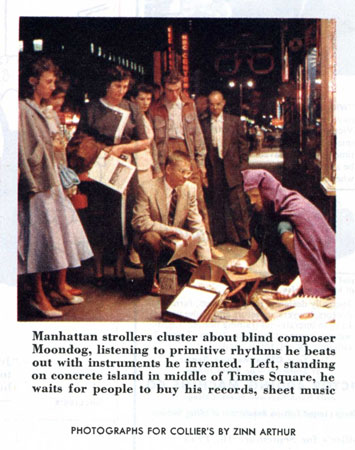 Advertisement for the release of Moondog 2 (1971)

Natalie Davis – The Man with the ‘Face of Christ, Unknown Newspaper from New York January 19, 1945 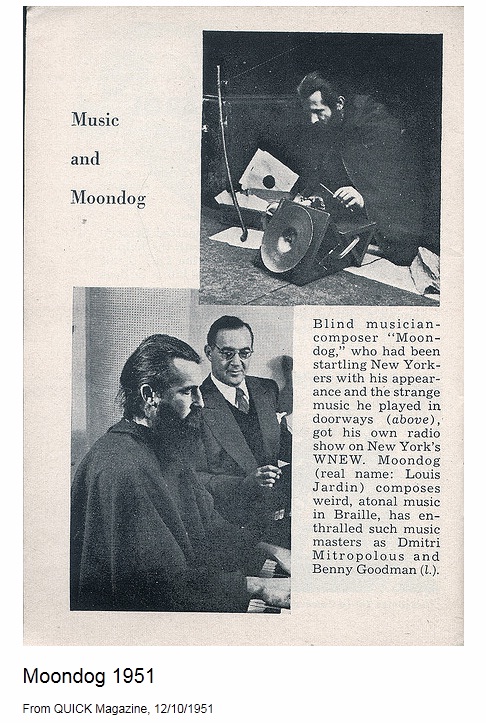 Clipping from The Capital Times – 1970’s 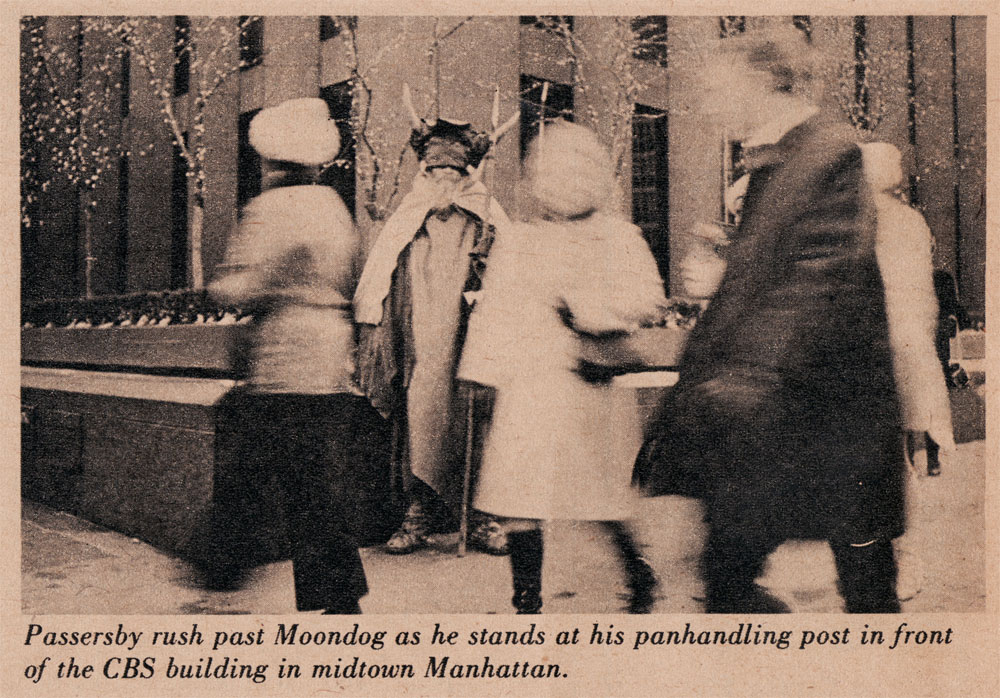 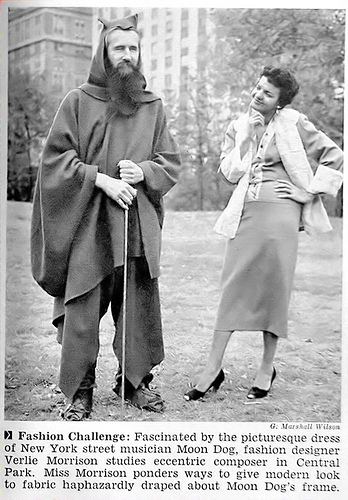