I have been aware of Marian Zazeela for roughly 20 years –  since my first visit to The Dream House, the total environment of light and sound which she created with her partner La Monte Young. The visit, instigated by my cousin Colin – a die hard fan of Young’s work, occurred during my late teens, not long after it opened at its Church Street location. Among my first encounters with the composer, it yielded a profound effect. The experience of that single sonic immersion, has rarely been equaled. During my early years in NY, The Dream House became an almost weekly pilgrimage. I have spent uncountable hours chasing that first high – wrapped in its tones. Zazeela’s contribution – arrangements of bent neon, ambient purple lighting, and cut paper mobiles, made less of an impression. In the face of the drone, they seemed like casual indulgences of a middle aged hippy – superfluous and out of balance with the power of the whole. 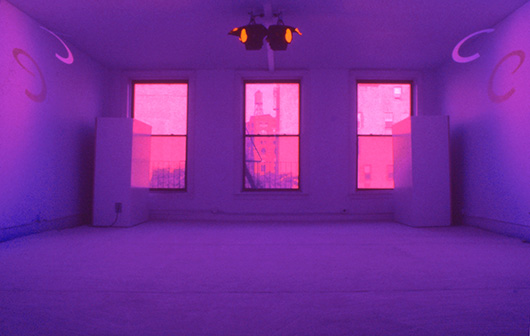 As I’ve hinted in the past, I have a complicated regard for La Monte Young. I love and adore his work, but find the man obnoxious, narcissistic, and generally loathsome. When he takes the time to speak of others (rather than himself), he can be incredibly generous, but those instances are rare. He is unquestionably one of the most important composers of the last century, but his public persona is difficult to endure. As they’ve rarely been separated for more that a half century, this sentiment often risks extending to Zazeela. It’s hard to untangle her from the man with whom she has spent her life.

Young and Zazeela, who met in 1962, operate within a number of historic narratives. As individuals, they are cultural bridges – crossing the worlds of Jazz, various iterations of the counterculture, as well as multiple spectrums of avant-garde music, film-making, publishing, and fine art. From 1960 on, they share a place in the cultural landscape of New York City, equaled by few. They’ve been at the heart of it all. During the early years that I was aware of Zazeela, I didn’t think much about her. Though I knew she had been at Young’s side for many decades, as well as a member of the Theatre of Eternal Music, she was largely lost in his shadow. From a distance, she appeared to have sublimated herself in support of the man with whom she had chosen to spend her life – an individual know for his demand of total devotion – a personality larger than life.

Marian Zazeela, during the early 1970’s.

Years ago, while in the throws of a love affair with the poet’s work, I read Diane di Prima’s Recollections of My Life as a Woman – her wonderful memoir of the first phase of her life spent within New York’s counterculture circles. Buried in its pages, was a narrative describing her drive across the country during the early sixties – from LA to NY. Her passengers were none other than Marian Zazeela and La Monte Young. There was nothing particularly remarkable about the trip, beyond a single description. The two figures occupying her back seat, constructed a rat’s nest out of rags and paper – a cocoon they were buried in for the duration of the journey. I laughed at the absurdity. The action was both obnoxious and brilliant. Plenty of credit is due to di Prima. How she put up with them, is a mystery. I can only imagine the look on a cop’s face, had they been pulled over.

Marian Zazeela, with her husband Marc Schleifer, from an article in the NY Post (1961)

That story, as simple as it was, made me think of Zazeela differently. It began a process which allowed her to be observed separately from her famous partner. Like Diane di Prima, she was a woman who had chosen to exist on the other side of the line – an active participant in the counterculture, long before the coming of the psychedelic era, when it became more of a social norm. Though uncountable women have entered this fold in the decades since, it’s worth remembering how rare, risky, and out of step it was at the time. Zazeela was a feminist pioneer – choosing to live her life according to her own terms, during an era when that was a dangerous thing. As I began to pick at the surface, I discovered that she had been an active member of many of New York’s most radical circles, years prior to her meeting Young. The pictures above and below, from an article in the New York Post from March 15th, 1961, featuring her in the loft which she shared with her first husband Marc Schleifer. Despite his conservative appearance, like Zazeela, Schleifer was a member of New York’s wildest circles. He founded the iconic periodical Kulcher, serving as its first editor, and was the assistant director on Jack Smith’s legendary Flaming Creatures. Following the end of his marriage to Zazeela, he moved to Morocco – entering a community of figures which included Ira Cohen and Irving Rosenthal. Unlike most of his peers, he never returned home – going on to become a prominent journalist and academic in the Middle East. (After converting to Islam, he changed his name to S. Abdullah Schleifer.)

When Zazeela returned to New York in 1960, following the completion of her studies, she began her creative life as a painter –  working a calligraphic style not dissimilar to the work for which she would later become known (you can see one such work in the photo above), as well as that of Henri Michaux and her friend Angus MacLise. Shortly after the New York Post article which featured them, her relationship with Schleifer came to a close and she began living with the seminal queer filmmaker Jack Smith – becoming his muse. During this era, Smith was unquestionably at the center of New York’s underground creative life – one of its most brilliant and wildest visionaries. He inspired an entire movement of practitioners, including Jonas Mekas, Tony Conrad, Ira Cohen, Kenneth Anger, and Andy Warhol.

Jack Smith’s most famous work Flaming Creatures, shot and assembled across 1962 and 63, is one of the most remarkable documents of that era in New York’s counter-cultural history. Initially banned as pornography, until the famous supreme court case surrounding it overturned the ruling, it is a wild seething construction of bodies and decedent behavior – a work of stunning beauty and artistry. Featuring a dizzying array now famous figures, it is a window into another world and time – equally into the brilliant mind of its creator.

Flaming Creatures is one of the most famous films within the entire history of avant-garde cinema. It needs little introduction. What few people know, is that Marian Zazeela played a central role in the narrative of the work. The film was conceived with her as its muse. Had the fates not intervened, she would have been its star. Flaming Creatures grew out of an early photographic project by Smith, largely centered around images of Zazeela taken in their home. Made in a slim edition of handmade copies, The Beautiful Book, like the film which followed it, operates as a remarkable window into a realm which few knew existed at the time. 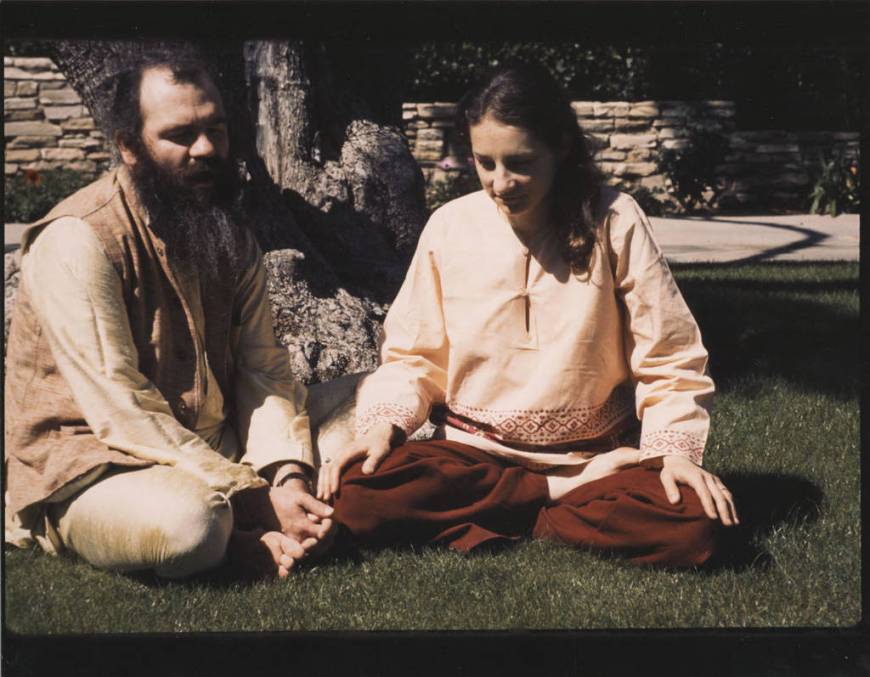 Shortly before the filming of Flaming Creatures began, Zazeela met La Monte Young. The pair become immediately inseparable. Unable to concentrate on anything but him, she turned over the staring role to her high school friend Sheila Bick. Though she painted the film’s credits, and both she and Young played small roles, it is tragic lost opportunity – leaving The Beautiful Book as the primary document of the period she spent collaborating with Smith. As an interesting side note, Zazeela almost immediately moved out her loft to live with Young, turning it over to her friend Tony Conrad. When he arrived, under the impression that he would be living alone, he discovered Jack Smith still in residence. It was the beginning of a long and productive relationship between the two. Tony’s image can be found in many of Smith’s works from this period – including Flaming Creatures where he appears bare assed in a dress. He also contributed a number of soundtracks to Smith’s films, serving as the earliest documents of his sonic efforts. He constructed the sounds for Flaming Creatures. It was also on one such set – that of Normal Love, that Tony met Beverly Grant, who later became his wife and longtime collaborator. Smith was one of Conrad’s great mentors – credited as being partially responsible for his beginning to work in film. Given his important place in history avant-garde film making, Zazeela is owed acknowledgement for the introduction, eventually giving way to works which sent unstoppable ripples out into the world.

Behind her, Marian Zazeela leaves a strange legacy – one both remarkable and steeped in curiosity of what might have been. Though it is unlikely that we will ever know her thoughts on the subject, and of course each to their own, for such an incredible and promising start, it seems her life may have been threaded with lost opportunities at the hands of the support she offered La Monte Young. During the mid 60’s she joined her partner in the world of music, contributing steadily to the activities of The Theatre of Eternal Music. Like Young, Terry Riley, Terry Jennings, Henry Flynt, and a number of others, she was a student of Pandit Pran Nath. Over the subsequent years, she has performed consistently with Young as a singer – both his works, and ragas. With the exception of The Dream House, very little of her work as a visual artist has emerged into the world. There was a small book published by Aspen in 1970, call Soul of the World. She drew the graphics for Young’s contribution to S.M.S in 1968, called Two Propositions in Black, as well as a joint effort called In Selected Writings. She offered a steady stream of poster designs for performances which took place at The Dream house and other locations, as well as handful of other objects. Nearly everything we have seen, with the exception of her earliest gestures, has been either a collaboration or in the service of Young and his circle. Her once radical and distinct voice seems lost in it all. Even her Wikipedia page, which, for anyone who has read Young, is quickly recognizable as being written by him (like his own), smacks of sublimation and tribute.

Of course Marian Zazeela’s decisions are her own. I’m not one to judge. It is entirely possible that without the company of her partner, her legacy could have been entirely lost – as were those of Jack Smith’s other muses, Sheila Bick and Beverly Grant. History is cruel. That said, it’s worth giving her credit as a radical woman, far ahead of her time – to view her on her own terms, for what she has made, been part of, and contributed to. Zazeela was at the center of it all, long before she met Young. In that light, I offer some images of The Beautiful Book – Jack Smith’s great window into another world, and his tribute to his once great muse. May they help untangle her from the sticky web of history, and offer entry into where it all began. 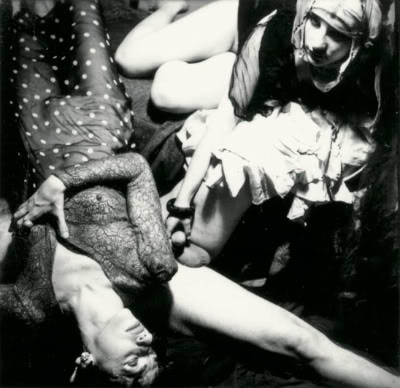 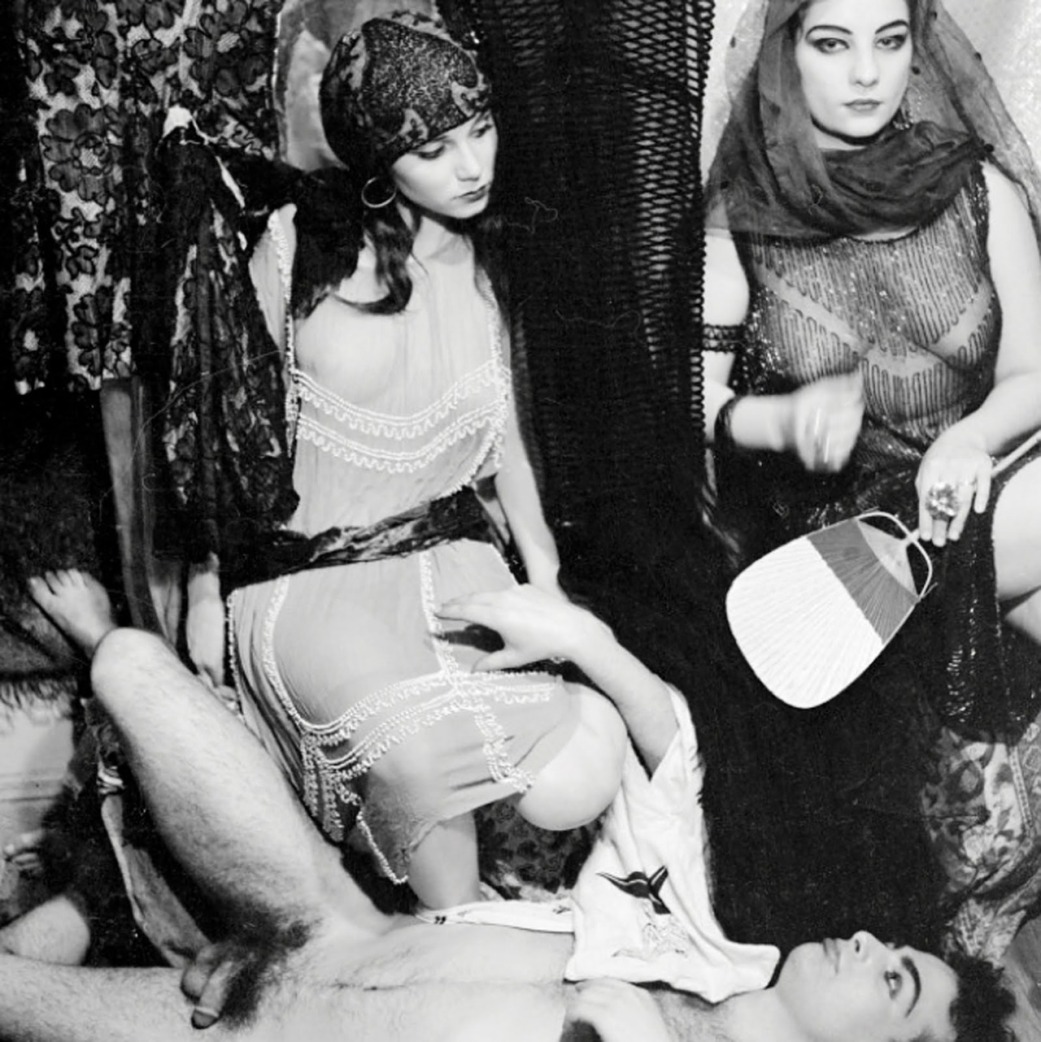