It’s difficult to express the depth of my love for the music of Don Robertson. A sonic visionary and an image of the creative heights of his generation, his work has long remained ahead of its time – sinfully neglected and overlooked. With the efforts of Malachi, Third Ear Band, Peter Walker, Gamelan Son Of Lion, Sandy Bull, Robbie Basho, and a number of others, his slim output exists within a remarkable canon of recordings, seeking to bridge the possibilities of the psychedelic era with diverse musics from around the world, and the ground gained by the outer reaches of the avant-garde.

In 1969, Robertson released his debut album on Limelight – a subdivision of Mercury Records, known for its dedication to jazz and avant-garde electronic music. In an era marked by remarkable and adventurous sound, Dawn is among the most striking results – nearly a half century after it was recorded, remaining radical, fresh, and engaging as the day it was released. Its two sides were conceived as opposing gestures of sonic being – the positive and negative, each entirely improvised in a single take – incorporating diverse structures and instrumentation from Western and non-Western traditions of music, with elements of field recording and spoken text. Despite its remarkable achievement, the album quickly slipped from view – lingering in the shadows until Akarma reissued it in the early 2000’s, bringing it to a new generation of receptive and adventurous ears. 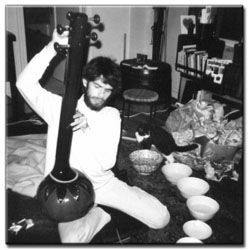 Don Robertson during the 1960’s – photo one and two by Leslie Able, three by unknown photographer.

Dawn needs little discussion. As a work of art, it stands on its own, but historically it holds great significance, being among the earliest gestures of New Age, and offering remarkable insight into the origins of that movement. Like Ariel Kalma, J.D. Emmanuel, Lino Capra Vaccina, Laraaji, Pauline Anna Strom, Steve Roach, and others, Robertson has long been dedicated to the more profound potentials of sound – the spiritual, elevated consciousness, and physiological effect – drawing heavily on the ground gained by the avant-garde. His music charted the path, and in retrospect (with those mentioned above) is an important defiance of the standard understandings ans associations of New Age – offering its inner truths, rising to remarkable creative heights, and levying rigorous challenges to the ear.

Following the release of Dawn, Robertson receded from view – privately dedicating himself to study and his love of sound. In 1980 he issued Celestial Ascent on his own DBR Music imprint – his first album in over ten years and the beginning of incredibly prolific period which stretched across the 80’s. Though bearing much closer proximity to the sonic signifiers of New Age than Dawn – sheets of overtone and ambience, generated by a zither, Celestial Ascent is a remarkably challenging and tense work – pushing sonic organization into new realms. It is one of the great artifacts of 1980’s New Age. Though impossible to find in its original issue, it was reissued by Black Sweat in 2015, and is an essential acquisition for anyone exploring the output of that movement during this era.

In my travels around the internet, I recently found myself on Robertson’s website. In its midst, I discovered that he had posted a long lost recording from the rehearsals which had lead up to the Dawn sessions. Needless to say I was overjoyed – thinking that I had heard all there was, while longing for more. Recorded with a trio – Robertson on guitar, Mike Dahlgren on drums, and Rand Elias on bass, the recording is psychedelic jam which stretches over the ten minute mark. Incredibly different than the final result of the album, they allow an understanding of how hard Robertson was pushing during this period, and the distance he traveled, while being wonderful in their own right. Dig in. It’s a rare chance to experience just a little bit more of one of the greatest artists of his generation. Enjoy!