Because my devotion to Indian Classical music is well expressed, and I own a reasonably sprawling collection of these sounds, I am often asked by those interested in it, where to begin. My response is nearly always the same – Ali Akbar Khan.

My love of Indian Classical music began long before I bought my first album. Having been a vegetarian for the better part of my life – beginning during an era when it was far from easy, I developed an early passion for Indian cuisine – quickly becoming one of the great loves of my life. While it may seem like a funny place to begin, it’s the uncanny origin of one of my deepest relationships in music  – notes drifting in the air, as I basked in the ecstasy of those astounding flavors. And so it was for years. Always longing for more, but, like so many, having no idea where to begin – peering at the tapes behind the counter at the cabstand on the Lower East Side where I regularly ate lunch, too afraid to ask.

Indian Classical music is one of a very small number, which I did not begin to explore through recommendation or by taking risks in the bins. Initially, I owed everything to encounters online – during the early days of music blogs. As they began to appear, I downloaded dozens of albums blind, knowing nothing – listening, searching for what I loved. Notably, I was a victim of pop culture. The sitar infused gestures of the 1960’s tainting my ear. Though clearly the product of a faulted impulse, I owned well over a hundred Indian Classical records, before I was willing to give the instrument a chance. Thus, the music I was initially drawn to, centered around different generators of tone – the voice, sarod, sarangi, veena, and violin. 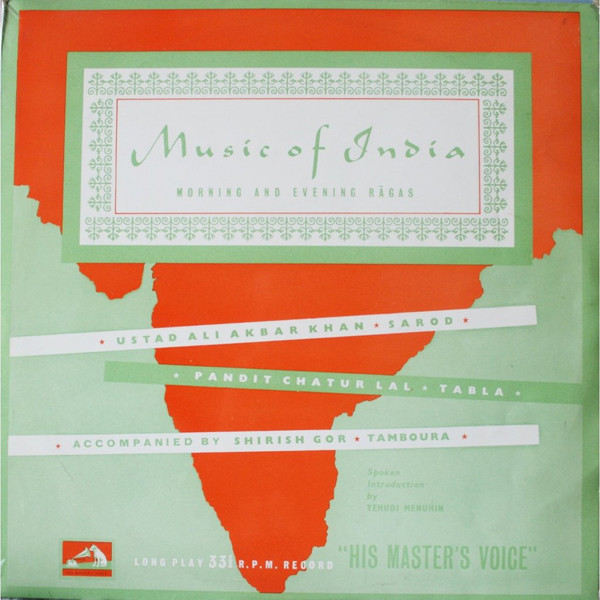 I was lucky. My love affair began at the top, when the sarod player Ali Akbar Khan reached my ears. I fell head over heals – unable to get enough. To this day, now owning in excess of 30 of his albums, I still can’t say what his playing possesses. It’s magical and moves me beyond words. I bought the first album I could find. Coincidentally, his first LP – Music Of India (Morning And Evening Ragas), issued by His Master’s Voice in 1955, and among the first recorded works of Indian classical music, with Ravi Shankar’s Music Of India (Three Classical Ragas), to emerge in the West. It took months to get it off of my turntable.

Ali Akbar Khan was part of the second generation of classical artists in India to capitalize on new recording technologies, but, with his brother in law Ravi Shankar, is one of a small handful to see its full potential, and through it (with radio) help resuscitate the Hindustani and Carnatic traditions. Prior to their emergence, these musics were largely associated with the upper casts, and where loosing their audiences rapidly. Khan and Shanker harnessed technology, bringing them to greater audiences within India, as they did in the West. They are almost entirely responsible for the thriving context we have seen develop over the last three quarters of a century, which continues today.

Khan comes from an esteemed linage of musicians, and is the son of the famed sarod player and teacher Ustad Alauddin Khan, who ushered an entire generation of Hindustani players into the world – Ravi Shankar, Nikhil Banerjee, Vasant Rai, Pannalal Ghosh, Bahadur Khan, and Sharan Rani, among many others. Touring extensively during the 1950’s and 60’s, ultimately helping develop an astounding growth in interest in this music across the globe, in 1967 he settled in Berkley, California – setting up his own school, and subsequently dedicating much of his energies to teaching until the end of his life in 2009.

Historically speaking, there are few players more important in the traditions of Indian classical music. His influence and contribution is beyond calculation. But.. what is left, and what is truly important, is the music itself, and in the case of Ali Akbar Khan, I can think of almost no one (in any tradition, stemming from anywhere) who possessed such a remarkable sensitivity and range, who could translate so much through his instrument. It is almost as though, when playing, he disappeared. That he became a conduit for some higher plane. In the Indian traditions, there is sometimes a draw toward ornamentation – especially within Hindustani music, within ragas are not written, but rather described, and improvisation holds an important role. Khan’s playing is elemental and austere – direct and raw.

It seemed strange, given how time I have spent with his work, and the fact that I have written about Indian classical music a number of times in the past, that I had never directly offered some dedication to him. For me, he is where it all began – the beginning of a love affair that has brought unimaginable joy into my life. In that spirit, here are some live performances (mostly from Indian television) to bring you out of the weekend and into the coming week. I hope they move you, the way they do me.