Bubbling below the histories of sound-art, fine-art, and avant-garde music, there are a handful of remarkable figures who bridge all three – collapsing the barriers between creative limit, context, location, and aural experience. Of these, Terry Fox long occupied a place of respect and renown for those in the know – among the best of the best, but, within the broader narratives of each discipline, he has never entirely received his due – lingering just out of view, responsible for so much of what followed in his wake. In recent years, the imprint of Edition Telemark has emerged as a definitive voice in boundary breaking territories of sound – issuing releases by the Maciunas Ensemble, Wolf Vostell, Joe Jones, and others, as well as their brilliant recent editions of Ernstalbrecht Stiebler’s Kanon / Torsi and Peter Behrendsen’s Nachtflug / Atem Des Windes, which I offered a slightly delayed review of last week. As luck with have it, they’ve just turned their gaze to Terry Fox, with the stunning LP 552 Steps Through 11 Pairs of Strings, drawing on a long lost recording from 1976.

Terry Fox emerged from the fertile ground of San Fransisco’s 1960’s and 70’s conceptual art scene, during an era when the dominant institutions of fine-art, seeing it as a backwater, refused to pay California any mind. Unlike his peers Bruce Nauman and John Baldersari, he neither went to NY, nor waited it out – leaving permanently for Europe before the 70’s were through. Fox represents an incongruence link within the history of conceptual practice – both embracing the sculptural materiality of nature, the industrial, and the every day – bridging territories explored by Joseph Beuys with those of Minimalists like Carl Andre, and land artists Walter De Maria, and Robert Smithson, while also recognizing, similarly to Nauman and Baldersari, that material was only a vehicle for an idea. As his practice progressed, Fox increasingly turned toward the performative and the multidimensional possibilities of an object – it’s ability to occupy space, and generate sound. 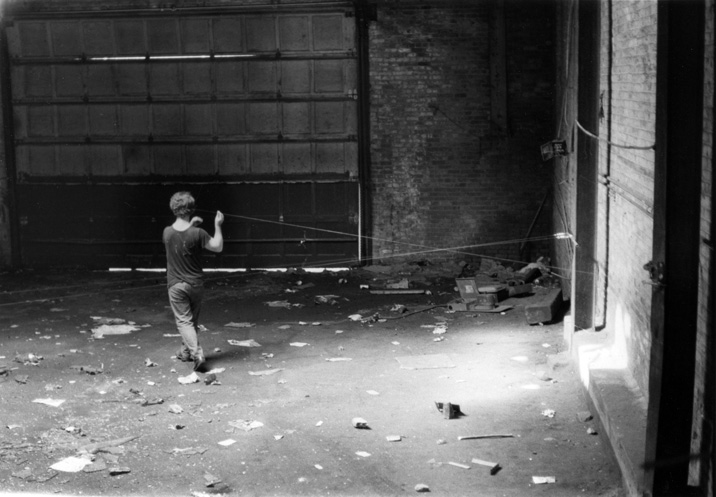 During the mid 1970’s, years before Ellen Fullman began to build similar instruments which brought her renown, or Alvin Lucier conceived Music on a Long Thin Wire, Fox began to experiment and perform on sculptural objects comprised of extended long strings. Tragically, the artist has remained largely absent from the historic narrative of the practice he helped invent. This is partially a consequence of the private nature of his performance, and the obscurity of his recorded releases, against the timing in which they emerged. Fox is incredibly well represented in the artifacts of sound art – appearing in one of its earliest exhibitions at the Museum Of Conceptual Art in San Francisco during 1971, and on the seminal Airwaves, Sound, Revolutions Per Minute, and Audio By Visual Artists compilations, but recordings of his string works did not begin to emerge until the 1980’s, first on Linkage, issued in 1982 by the Kunstmuseum Luzern’s imprint, and then on Berlino / Rallentando, which appeared in 1988. Linkage has long offered an important clue, with it’s earliest working having been recorded in 1975, but, until 552 Steps Through 11 Pairs of Strings – recorded in Fox’s San Francisco studio during 1976, nothing from is important period has yet to emerge. 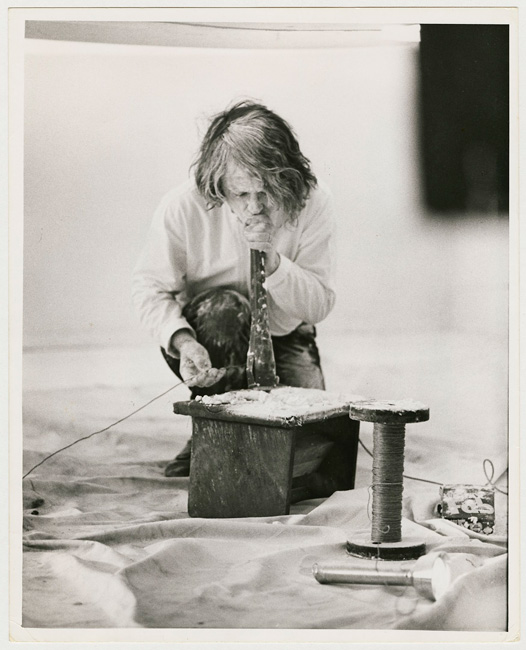 552 Steps Through 11 Pairs of Strings, which, as with most of Terry’s Fox’s works from the 1970’s, draws its ideas from the labyrinth at Chartres Cathedral in France, is the result of a 4½ hour performance where the artists stretched 11 pairs of piano wires of 11 different thicknesses across the floor – creating a giant horizontal harp. The audience was positioned in the dark loft on the floor below – within what became the instrument’s resonant chamber. Fox played the the strings with a soft mallet in one hand and a score – a 34-foot string tied with 552 knots, in the other. Each knot represented a step in the Chartres labyrinth with the 34 turns indicated by either a piece of wire in a knot (a move to the next longer pair of wires) or a rubber band around a knot (a move to the next shorter pair). The outcome, as it appears on this remarkable double LP, are stunning – a revelation in idea, practice, and sound. Comprised of four selections from the performance, its presents an evening world of rhythm and bass – a deep rumbling, which often uncannily recalls the artists most famous work, The Labyrinth Scored For 11 Different Cats.

If ever there was an important document from the history of sound practice to emerge, 552 Steps Through 11 Pairs of Strings has got to be it. As seminal as archival releases come – including images of the score and instrument, as well as the invitation card to the performance, and including texts by Terry Fox and Alan Scarritt, for anyone interested in the histories of sound-art, fine-art, and avant-garde music, this is moment not to be missed. You can check out two selections below, and pick it up from SoundOhm.