Note: The reviews which follow, draw from the texts I contributed to Soave for each respective LP. Apologies for inevitable redundancy. They were written from the heart, serving both applications equally well.

It’s funny to look back. Roughly a year an a half ago I wrote one of the first long form pieces on this blog, The Obscure Brilliance of Italian Minimalism (In Nine Albums). It was a humble attempt to draw attention to some of my favorite records of all time, coupled with the hope to offer some attention to Italy’s astounding, but grossly neglected, history of avant-garde and experimental music. Particularity at that point, before The Hum (somewhat inexplicably) found itself with the loyal audience it currently does, I expected the piece to be overlooked. It was a cry in the dark. To my shock, it’s been read by 20,000 people, spread across every corner of the globe – far beyond anything I could imagine, let alone conceptualize as a potential audience for these wonderful sounds.

It’s impossible to know what effect that article had. I’m sure it was a passing curiosity for many. I hope, at least for a few, it carried some introductions, forming the foundation of love affairs with this music as deep as my own. One thing which is important to designate about The Obscure Brilliance of Italian Minimalism, is that it was intended as a window into this world through my own tastes, representing albums in my own collection. Bearing those constraints, it was never positioned as a definitive survey. Given this music’s breadth and diversity, that would be a near impossible task.

One of the happier results of the article was the fact that it put me in touch with a few of the artists, and a number of the people laboring to bring greater appreciation to this music. One such case was the Italian imprint Soave, who got up and running earlier this year. Of the nine albums they have released in that time, they have been kind enough to ask me to contribute texts for six, four of which stand before us now. Each case has been a great honor, not for the least, the opportunity to be involved in the reemergence of albums so dear to my heart.

Soave got rolling with a pretty astounding pair of releases – Giusto Pio’s lost masterpiece Motore Immobile, the one album within The Obscure Brilliance of Italian Minimalism I had yet to find a vinyl copy of, and among my greatest holy grails, with the reissue of Wolf Vostell’s stunning Dé-coll/age Musik. They’ve been busy since, so much so that time restrictions have prohibited me from keeping up in a timely fashion (my apologies). The first two albums within this review – the long awaited reissues of Roberto Musci’s The Loa Of Music and Riccardo Sinigaglia’s Riflessi, have been out for a few months. The second two, equally anticipated reissues of Giovanni Venosta’s Olympic Signals and Arturo Stalteri’s …E Il Pavone Parlo’ Alla Luna, have only just dropped. All four are absolutely essential, leaving me waiting on baited breath for what the label is going to bring us next.

Let me just lay it out, avoiding any ambiguity. This record is fucking astounding. A masterpiece of the highest order. Stop reading, drop what you’re doing, and go by it. You won’t be sorry.

Italian experimental music is notoriously resistant to definition and location. Particularity among the artists who emerged between the mid 1970’s and the middle of the 80’s, a remarkable sense of curiously presents itself – attempts at a kind sonic democracy, drawing the sounds of countless diverse traditions from across the globe into its midst. If ever there was an object to encapsulate the spirit of this movement, it’s Roberto Musci’s debut album from 1984, The Loa Of Music. Recorded after a decade traveling the world – drifting between African, Indian, and the Near & Far East, studying music, making field recordings and collecting instruments, not only is it a perfect culmination of such an experience, but a lens into the rigorously democratic and international spirit of the generation of artists to which Musci belongs.

Phenomenally ambitious, The Loa Of Music entirely refuses the well trod path – distilling a remarkable range of sonic reference and reality. A work of field recording, musique concrète, electronics, synthesis, and instrumentation, pulling from countless musics from across the globe, the result is nothing short of brilliant and stunningly beautiful. A near perfect work – an egoless gesture, which rather than attempting to find consensus, offers every voice equity and cohabitation – harnessing the history music, with all of its cultural diversity, as a vision for a more ideal future. Geographies and their sounds intertwine, while Musci’s interventions and instrumentation thread a path through their midst. Ambiences ripple, sounds and voices converse in a vision of unity that may only exist within sonic realms. Unquestionably seminal, and one of the most important works to emerge from Italy in the last 50 years.

I love this record with all my heart, and can’t express how grateful I am that Soave has brought it back into the world. It’s never been issued on vinyl since it’s original release, so this pressing is not to missed. You can check it out below and pick it up via SoundOhm or from the label direct.

Riccardo Sinigaglia, with Gabin Dabiré and Walter Maioli, made up one third of Futuro Antico – one of the most important collaborations to emerge from the 1970’s and 80’s Italian avant-garde. I covered Futuro Antico in The Obscure Brilliance of Italian Minimalism, and their output has been faithfully attended to by Black Sweat. The project, whose name literally translates to ancient future, joined traditional sounds and instrumental from around world, with electronic music – the sonic past, present, and future as one.

Recorded shortly after the collective’s most prolific period and released in 1986, while more singular and more idiosyncratic, Sinigaglia’s Riflessi (also covered within the aforementioned article) caries these concerns at its core. Built from field recording, collaged samples, synthesis, and instrumentation – shifting from hypnotic rhythm to radical and displacing structures, it establishes a remarkable link between ancient and non-western musics and efforts emerging from studios like Groupe de Recherches Musicales.

A work of staggering rhythm, texture, beauty, Riflessi builds a world with almost no parallel – imbuing electronic music with touch, tactility, and humanity, while sacrificing none its challenges and intellectual heights. A rattling sonorous wonder, emerging for the first time on any format since its original pressing, before us is a a lost piece of the puzzle of the wondrous Italian avant-garde. You can check it out below and pick it up via SoundOhm or from the label direct.

Recorded between between 1980 and 1983, and privately issued in 1987, Arturo Stalteri’s …E Il Pavone Parlo’ Alla Luna falls among the last artifacts of Italy’s great wave of musical Minimalism. Like the movement to which it belongs, rigorously resistant to categorizations and definition, it’s an overlooked marvel, sculpting a startling singularity. A radical and democratic vision in sound, blending elements of New Age, the avant-garde, and Prog, with Western and Indian Classical musics. (Likewise, this is one of the nine albums featured within The Obscure Brilliance of Italian Minimalism)

Long overshadowed by it predecessor, the Prog. opus Andrè Sulla Luna, free from the burdens of context, …E Il Pavone Parlo’ Alla Luna rises as Stalteri’s true masterwork. A complex and ambitious hybrid, built around organ and piano. Each passage struggling for creative autonomy – dislodging themselves from the whole. – as challenging as they are accessible, to those willing to heed the call. Despite its repetitive rhythms and cycling tones, bound to American Minimalism, …E Il Pavone Parlo’ Alla Luna’s complex relationships and breadth of territory, locate it as a distinctly European work – a wondrous late breath, and seminal entry, in Italy’s remarkable canon of avant-garde and Minimalist music. A rippling oddity, not quite like anything else. You can check it out below and pick it up via SoundOhm or from the label direct. 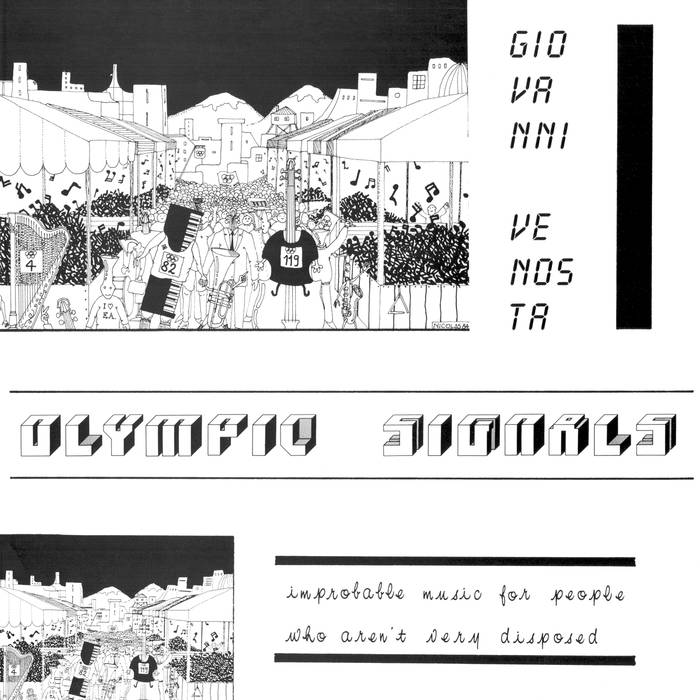 Giovanni Venosta’s Olympic Signals, is one of the great lost documents of the Italian avant-garde – the first solo outing from one of the movement’s seminal voices, most recognized for his collaborative work with Roberto Musci. In a sea of unjustly neglected works, Venosta’s debut rises from the tide time as a towering gesture of sonic creativity. A shimmering, complex wonder of overwhelming Minimalistic beauty. One of the great records of the 1980’s, that almost no one heard.

Recorded 1984, Olympic Signals rests firmly within the Italian movement of musical Minimalism. Built around tightly entwined, repetitive, cycling piano and synthesizer tones, shifting between resonance and dissonance, Venosta’s effort flirts with, and undermines the broad vision of what this music is seen to be – inconvenient truths, buried in kernels of deceptive beauty. While unquestionably singular, it holds historical distinction as the foundation of the creative partnership which would come to define both Venosta and Musci’s careers – conceived as a partial response to the later’s stunning debut The Loa of Music, and including contributions by him on sampler and tape. Olympic Signals is the long unrecognized mirror, to its more famous peer.

Rigorous, startling, and incredibly rewarding, Olympic Signals is a lost piece in the puzzle. Yet another entry in Soave’s remarkable dedication to the history of the Italian avant-garde. A resurrection and long overdue offering of justice, not only to an incredibly work, but to the understanding of late 20th century music at large. Absolutely stunning on every count. You can check it out below and pick it up via SoundOhm or from the label direct.