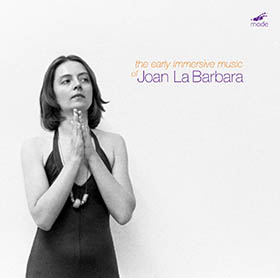 Over the time during which I have been writing The Hum, I’ve made a point to discuss Joan La Barbara as much as I can, this being the fourth instance, but it’s never enough. She is one of great figures in the history of the American musical avant-garde – holding equal standing as an innovator, composer, and performer, but has rarely received the attention she deserves. Considering that she single-handedly changed the face of music, has defined the field of extended vocal technique for the better part of half a century – largely sculpting its terms from scratch, and has continuously pushed our understanding of the sonic possibility of the human voice for decades – drawing on its primal root, thrusting it into the unknown, this sin becomes that much more apparent. Even the worlds of avant-garde and experimental music, which are far better than most, have a long way to go when it comes to gender equity. This began to change in 2016 with Arc Light Editions’ reissue of her seminal solo debut from 1976, Voice Is The Original Instrument, followed later that year by 1977’s LP Tapesongs.  It’s clearly done some good, being that twenty years have passed since the last new entry to La Barbara’s discography, and now we’re graced with another brilliant addition – The Early Immersive Music of Joan La Barbara, comprised of recordings from the roughly the same period as Voice Is The Original Instrument and Tapesongs, the latest release from the New York based imprint Mode Records, who, in recent years, have assembled a remarkable catalog of contemporary and historic avant-garde works.

La Barbara’s contribution is multi-pronged and hard to fully fathom. She entirely changed the landscape of what was considered creatively possible with the human voice, almost single-handedly sculpting the context we have inherited. A believer in democratic collaboration, she first emerged within the New York scene during the early 1970’s, as a contributor to the works of others – John Cage, Morton Feldman, Robert Ashley, Steve Reich, Philip Glass, her husband Morton Subotnick, and countless other luminaries from the art and music worlds – a spirit and practice that she continues into the present. While there is no denying the power and importance of those works, it is her own solo efforts, much of which has lingered in obscurity, released by her own Wizard record and long out of print, within which some of the most important and revolutionary gestures in 20th century music can be found.

The Early Immersive Music of Joan La Barbara features three astounding, long-form works from the first decade of La Barbara’s recorded output – As Lightning Comes In Flashes from 1981, Autumn Signal from 1978, and CYCLONE, created and recorded between 1976–77, but never before released. It represents a potent revelation for the present – an image of how important and influential the composer has always been. As Lightning Comes In Flashes, a mind-bending, primal tapestry of vocal artistry, is an encounter and metaphor for La Barbara’s sprawling creative ambitions. In her own words, the work was “conceived as an outdoor performance piece for singers, dancers, oversize costumes that unfurled and were left behind as a sculptural environment, video and sound installations. Designed as a life metaphor, the image was that of overlapping entities, each fulfilling a life pattern which ebbs and flows and climaxes in its own time”. Even when compressed to the dimensional of sound, the sprawling depth of physicality and space is unavoidable – a sculptural landscape of sonorous nodes. Autumn Signal is a work for voice and Buchla synthesizer, offering a fascinating snapshot into her intimate world. It is the primary creative outlet of her life’s great love, her husband Morton Subotnick, with which her voice intertwines. It is a stunning effort in duality – her voice represented twice, once processed, but more representational, with the other pure and abstract. There are few equivalents, before or since. CYCLONE, conceived in 1977 at PS1 in New York City as a quadraphonic sound performance/installation, is a work for multiple voices, percussion and Arp 2600 synthesizer sounds. Never before released, it provides a fascinating window into the work during this period. A swirling, immersive world of beautiful and humanity which draws in the body and ear.

Like nearly everything its composer has created, The Early Immersive Music of Joan La Barbara is nothing short of brilliant – a entirely singular conception of what experimental music is and means. While both As Lightning Comes In Flashes and Autumn Signal were released on Wizard in the early 80’s, those LPs have been out of print for much the time since and were never issued as CDs, making this release an essential entry in the contemporary appraisal of La Barbara’s remarkable contribution to the history of music, offering entirely new mixes. Timeless and as honest as it comes. A fascinating intellect allowing her humanity to exist entirely in the air, hanging before our ears. Wonderful, beautiful, challenging, and historical significant. Check it out below (it’s a playlist of all three tracks), and pick it up from Mode Records, SoundOhm, or a record store near you.

One thought on “on the early immersive music of joan la barbara, via mode records”