For years, on regular trips to Paris, I would make my way to the 11th arrondissement, passing the gates of Cimetière du Père Lachaise, moving toward the record shop which was always my first stop in city after dropping my bags. Souffle Continu is a rare and disappearing breed – incredible spaces specializing in avant-garde and experimental music. New York once had Other Music. Glasgow had Volcanic Tongue. London had Second Layer and Sound 323. All are gone, with only a few scattered survivors dotting the globe. Of those – past and present, Souffle Continu has always been among the best. In 2014, extending their already ambitious efforts, they launched their own imprint, offering particular focus to artifacts from France’s remarkable but neglected gestures in avant-garde and experimental sound.

Within the narratives of music, it’s hard not to encounter voices, nostalgically reminiscing about the virtues of former scenes and bygone eras – of how great it was, against how dull it’s become. This sentiment often double as an indication of the loss of relevance of those individuals and their subjects – that they have become cemented in the past, unable to keep up with the pace of evolution and change. Of course, with the passage of time, great things are inevitably lost, but great things are always equally gained. The tragedy is not loss itself – anything can be salvaged or resurrected, but how little seems to be learned – that some semblance of the best of both worlds is a fleeting dream.

For my generation, those who entered the world of music in the years before the rise of the internet, perhaps the greatest temptation toward nostalgia is the loss of our relationship with record shops – spaces which offered a lifeline to remarkable worlds of culture. It was within these walls, in the company of peers, that we learned and developed our tastes. Ironically, in the give and take, it’s undeniable that, with the internet and the way in which record shops are currently navigated, many things have gotten better, but, importantly, despite all the good, this has come at the expense of the seminal voice of the record stores themselves – their profound contribution to the trajectories of our learning processes.  Particularly in specialized shops, these spaces doubled as curatorial platforms led by highly developed and individualized taste, asserted through what they placed on display, the texts they wrote and applied to the covers releases, what they played on their stereos, and, most importantly, through the conversations we had with the people who worked in them or encountered there. While businesses, at their best they were also passion projects, intent on developing the knowledge and enthusiasm of their customers – something usually lost in self led explorations of today. We may have been discovering less, but it was refined, incredible, and always part of larger discourse. It is this spirit which Souffle Continu has always retained in their brick and mortar space, and carries forth as a central component within their efforts as a label. In other words, the imprint is a rare realization of the best of both worlds – a curatorial platforms which springs from highly developed and individualized taste and knowledge, leading the ear toward discoveries which would otherwise not be had.

Over the last couple of years, Souffle Continu has reissued a staggering assortment of LPs by Semool, Jean Guérin, Bernard Vitet, Horde Catalytique Pour La Fin Jean, Jacques Birgé & Francis Gorgé, Barney Wilen, Emmanuelle Parrenin, Jean-François Pauvros & Gaby Bizien, and numerous others, each a standing challenge to how the history of avant-garde music in France is understood. While the country has always played a crucial role in the history of this music – from its beginnings in Dada, to the developments of Musique concrète, and experimental electronic and electroacoustic music, many of its more adventurous efforts remained overlooked during the decades following the Second World war, suffering from unjust neglect during an era in which the dominant creative narratives shifting toward the United States and Britain. It is this legacy which SouffleContinu combats – illuminating remarkable recordings that few beyond France have ever heard. While their focus has always been broad, recently they have turned their efforts toward the catalogs of some of the country’s more remarkable efforts in free jazz, particularity notable within their surveys of the Cohelmec Ensemble and Workshop de Lyon, a gesture now expanded with four incredible vinyl reissues from Dharma, one of the seminal outfits of French improvisers from the 1970’s.

France’s participation in the history of jazz and free improvised music is second only to the United States. From the very beginning of both idioms, it offered shelter to artists, with the ability to live, record, and perform beyond the oppressive shadow of American racism. It was here that these musics found one of their most dedicated and loyal fan bases. It isn’t surprising that indigenous forms were quick to blossom, but, because France played host to so many incredible players from the United States and other countries, its own artists have often been overlooked, with the exception of those in direct contact or collaboration with  figures from abroad. Dharma is one such case.

Dharma was ensemble that existed under different line-ups and variations on the name over the first half of the 70’s, from the constrained Dharma trio comprised of Jacques Mahieux, Michel Gladieux, and Patricio Villaroel, to the Dharma quintet (later simply called Dharma) which, in addition to Mahieux, Gladieux, and Villaroe, also included Gérard Marais, Jeff Sicard, and Gérard Coppéré. The project sprang from the radical left wing politics of May 68, filtered through a respect and association with transplanted players from AACM like Anthony Braxton, or Noah Howard, Archie Shepp, Sonny Sharrock. Always ambitious, they quickly pushed the idiom forward, visible over the progression of their discography, incorporating a vast range of creative touchstones, from deep spiritual jazz, to fusions of rock and jazz. Souffle Continu’s incredible series covers the group’s output and remarkable evolution in its entirely – Mr Robinson and Snoopy’s Time from 1970, End Starting from 1971, and Archipel from 1973‎, the totality of which can now be seen as one of the great artifacts of the country’s history of indigenous avant-garde jazz. 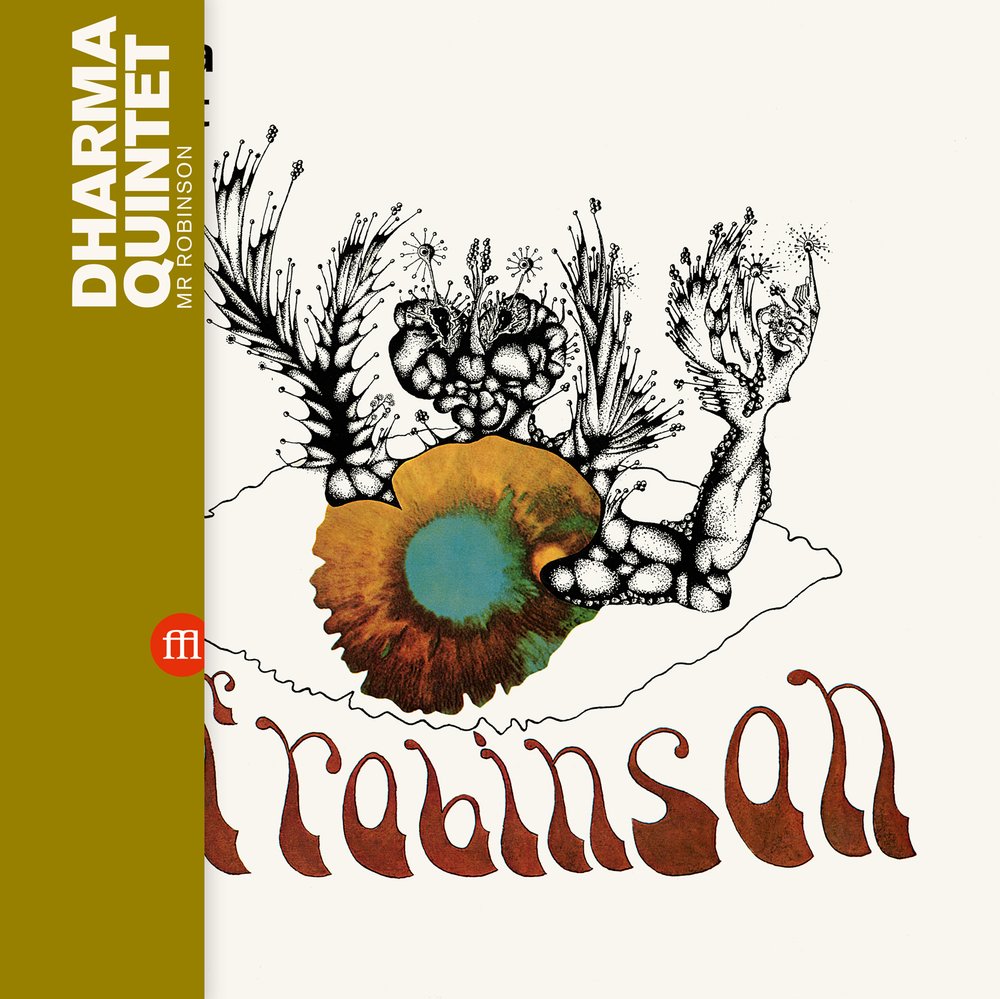 Released in 1970, Mr Robinson is Dharma’s first release. Recorded by a quintet of Jef Sicard, Gérard Coppéré, Patricio Villarroel, Michel Gladieux and Jacques Mahieux, it is a true product of its era – the blending of a radical collectivist spirit and communal living, which fed wild adventures in sound. The musicians lived together, rehearsed endlessly together, and collectively purchased the necessary material together. Of all the band’s output, it is arguably the closest to a direct realization of free-jazz, falling within the territory expected from releases from the same period on ESP, America, or BYG Actuel. Wild frenetic and open rhythms and sonorities intermingle as each member pushing the next toward the unknown, joined together to create remarkably solid forms. Unquestionably one of the great unheard artifacts of European improvised music, rescued from obscurity and standing tall with a great many of the towering works of the era. An alternate vision of radical politics and creativity which began in the United States, taking seed in France. It is wonder to hear unfold, helping us catch a vision of what was and what might be. Check it out below.

Recorded three months after Mr Robinson in 1970, Snoopy’s Time encounter Dharma constrained to the trio Jacques Mahieux, Michel Gladieux, and Patricio Villaroel. Despite the little time which had passed, it is clear that radical changes and points of inspiration where in evolution. Even whittled down to three players, their sound is thickening, taking on heavy melodic spiritual tones – nods to where jazz had been as much as where it was going. Viewed by many as Dharma’s quintessential release, Patricio Villarroel’s stunning electric organ playing takes center stage, evoking classic Herbie Hancock and fusion era Miles Davis. Though Snoopy’s Time could be seen as one of the most accessible of Dharma’s releases, for all its beauty and straight ahead time, it sacrifices none of the ensembles characteristic complexity and willingness to challenge. It is a Trojan horse, rethinking the delivery of the radicalism at band’s core. Wonderful, intoxicating and immersive – an LP which reminds ear and the heart of the true international potential held by the many forms of jazz. There are embedded samples on Souffle Continu’s site. You can check them out here.

Inspired by Albert Ayler’s pronouncement to play your own music, Dharma’s third LP, End Starting, issued in 1971, displays even more remarkable developments underway in the ensemble – a full circular hybridity, which melds the wild free improvisational structures and tones of Mr Robinson, with the thick spiritualism and fusion of Snoopy’s Time, proving that pushing creative boundaries was a central objective of the group. To put it simply, it’s stunning spectacle for the ear, arguably, at times, falling the closer to the Sun Ra and his Arkestra than anything else of the era. Heavy, deep grooves are placed alongside wild and full free playing, pulled back and released in an elastic frenzy. The result is huge sound and an incredibly dynamic range of output boiled into two sides single LP, leaving little surprise of why it ended up on the Nurse with Wound list as one the band’s key inspirations. Wild, wonderful and incredibly inspiring, it’s confounding to imagine that so few have heard it. Check it out below.

Darma’s final release, issued in 1973 in a tiny edition of 100 copies, with an additional deluxe edition of 20 with hand drawn covers, is undeniably bittersweet. It is so wonderful that the ear yearn for more. I suppose we must be grateful that it exists, and that Souffle Continu has reissued it, finally allowing to be widely heard for the first time. Like its predecessor, End Starting, Archipel mixes elements of free rock, free jazz, and grooving spiritual jazz, within a series of collective explosions based on abrupt and contrasting improvisations. Across both sides, piano, guitar and saxophone intertwine over intense rhythms. Fascinatingly, the groups curiosity was clearly beginning drift further afield, taking on influences from the modal traditions of North Africa and the Middle East. Arguably the most creatively expansive, challenging, and dynamic of all their releases, the fact that this is final effort from this incredible ensemble makes it heart wrenching. It’s hard to thank Souffle Continu enough for bringing it back. Absolutely essential. There are embedded samples on Souffle Continu’s site. You can check them out here.

I can’t recommend these enough. A true revaluation on every count, particularity for those like myself who had allowed themselves to imagine that they had heard all the free jazz there was to hear. This is what the reissue market should always be. You can pick them up from Souffle Continu, SoundOhm, or a record store near you.