the return of nipples 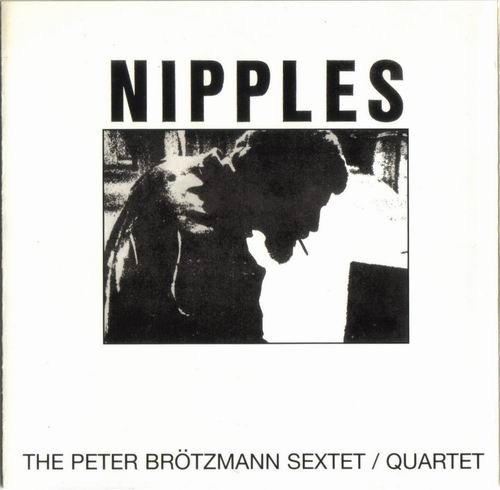 I’m a pretty late on the uptake here, but being nomadic (NYC>London>NYC>Chicago>FL>Mexico City) since early September has forced things to the wayside. I haven’t gotten a chance to highlight the remarkable occurrence of Peter Brötzmann’s Nipples vinyl reissue. It seems like it hit the racks in December, but there’s been very little mentioned of it in the press or music journals. Something that confounds me. First released in 1969, and out of print for most of the years since, Nipples is the stuff of legend. A Free-Jazz holy grail for many, including myself. Unlike Brötzmann’s other releases from this period, which were largely on FMP or his own label BRÖ, Nipples was was issued by the Munich based label Calig. Their catalog is eclectic, but had a short focus on Free Jazz in the late sixties and early 70’s. They released albums by Marion Brown, Karl Berger, Gunter Hampel, and Pierre Favre. This time around it finds form on the excellent Cien Fuegos, a Vienna based subdivision of Trost, which has been making great strides reissuing Brötzmann’s back catalog for the past few years. Their releases tend to be a little pricey, but they do a great job and are totally dedicated to quality. It’s worth it.

As I’ve mentioned in the past, because of my dedication to its American cousin, European Free-Jazz was something I resisted for many years. Peter Brötzmann was central to breaking me down. I heard about Nipples when Thurston Moore’s Top Ten Free Jazz Underground started circulating in the mid 90’s. The album was number eight on the list, and one of the few I hadn’t heard. All of the albums on Thurston’s Top Ten (actually fourteen) are rare, but Nipples was (and has remained) nearly impossible to find. I didn’t know anyone that had a copy, and didn’t hear it until it was issued on CD in 2000.  The album quickly showed the error of my ambivalence and became a fast favorite. Recorded over two nights and partially at Conny Plank’s legendary Rhenus Studio, the album features one of the greatest lineups of European improvisers ever assembled – Brötzmann, Han Bennink, Derek Bailey, Fred Van Hove, Evan Parker, and Buschi Niebergall.

Nipples is comprised of two single-side improvisations, the title track, and Tell a Green Man on the second side.  Nipples is what people expect of Brötzmann. It’s raw energy and fire, blasting out of the speakers, and pushing you into a wall. I’ve seen Brötzmann play more times than I can count. Over the years, he hasn’t lost an ounce of spirit and energy, but he has become a more soulful, introspective player. The album is a window into a different vision of the man. His playing is raw, brittle, and aggressive. The interplay he instigates feels like a knife fight. Sonorities scrape against each other, while dysfunctional rhythms push toward a rising sea of sound. Bailey and Van Hove are slightly buried in the mix, but their relationship is wonderful. Each note is shocking – as much in rhythm as tone. They bounce against each other, laying an unsettling ground for the more overt fire of their collaborators. Though undeniably of Brötzmann’s vision, Tell a Green Man is less characteristic. It’s restrained and closer to the sort of gestures you are likely to find on Incus over FMP. Ironically, Bailey was absent from this session. For me, the second side makes the album. Green Man finds its contributors on slightly more even footing and in closer conversation. Though very much the same sonic territory of its predecessor, rather than an aggressive confrontation, the spirit of collaboration and responsiveness comes forward. The players slow down, lock together, as remarkable intellect oozes from every note. Again Van Hove’s piano playing is the under-acknowledged foil. Every note he drops into the mix is incredible. Brötzmann is in perfect form. Though more restrained, he manages to lose nothing in the transition. His raw energy, and latent anger, are more aware than ever. Wound like an elastic band, waiting to be let loose.

Despite being an avid collector of Free-Jazz records, I believe it’s a music best heard live. As great as they are, few albums are capture what happens in the room. Nipples is an undeniable exception. It’s the great document of this incredible generation. Few can match it. If you were going to own a single album of European free improvisation, I would make this the one. If you’re in NYC Record Grouch usually stocks all of Cien Fuegos’ releases. If you’re in London pick it up at Cafe Oto’s well curated shop. Or you can buy it online in Europe at Sound Ohm, or in the US at Superior Viaduct.  Get it before it goes. I can’t recommend it enough.