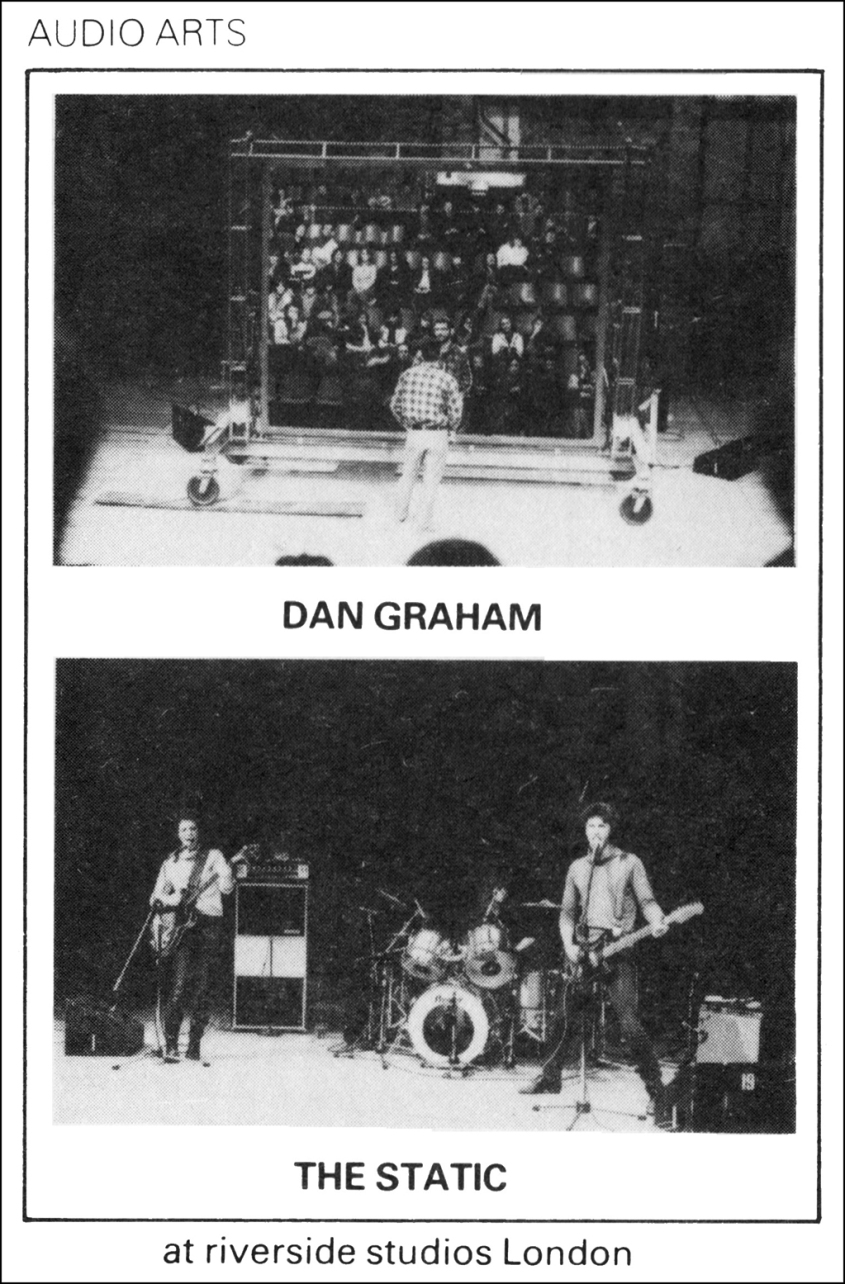 The discourse between fine-art and sound and music is fascinating. Having a fine-art background, and a life largely dedicated music, my love for this collision was written on the wall. Historically there’s a fairly wide acknowledgment of the influence of “art world” thinking on the second half of Twentieth Century music – be they the ideas of John Cage, or the sounds of The Velvet Underground, Brian Eno, Yoko Ono, Patti Smith, Sonic Youth, and on and on. This has largely overshadowed the second part of the conversation – the influence of sound and music on fine-art contexts. The subsequent results remain among the most obscure and under-acknowledged in the history of audio recording – so much so, that people in the art world often remain unaware of them. I’ve been quietly collecting these works for years, saddened by how much neglect they suffer, secretly hoping that someone would find a way to shed some light on their wonderful history. Over the last few years Primary Information has been taking great strides toward just that.

During the first part of the Twentieth Century artists like Marcel Duchamp, Jean Dubbuffet, Kurt Schwitters, and Jean Tinguley, all made forays into the worlds of recorded sound, laying the groundwork for later gestures by Dieter Roth, Martin Kippenberger, Joseph Beuys, Albert Oehlen, Mike Kelley, Art and Language, and Jack Goldstein, among countless others. Through their approaches, listeners are forced to challenge meaning and proximity of sound and music in recorded form.

Beyond the neglect they have suffered by wide audiences, these recordings have been largely overlooked from within. In the last sixty years, only four books have been dedicated to the subject – all of which attempt to catalog these efforts by artists, but rarely offer insight into their meaning and proximity. Because of the lack of critical attention, these recordings are usually framed as extensions of an artist’s larger creative practice – multiples, performative documents, anomalies, or antagonisms, and remain where they are found. It’s a default, and does them little service – particularity because the underlying conceit of the Artist Record relates to movement. As you widen the lens, a complex picture begins to emerge. Though rarely done, it is important to distinguish these records from “sound-art” – which places sound into a fine-art context with equivalency to other mediums operating there – painting, sculpture, installation, film, video, etc. Though there are many recordings of this kind of work in circulation, context and orientation are crucial. Most documents of sound-art remain within the conceptual framework of the “gallery”. They are artifacts which defy the temporality of their subjects, and as such have a closer proximity to a film or photograph documenting a piece of performance-art. The Artist Record inverts this. It is a creative action which attempts to infiltrate the intellectual tropes of fine-art practice into the larger idiom of popular culture. Rather than the gallery, its context is the vehicle of transmission (LP, tape, CD), and its natural habitat (players, homes, shelves). The Artist Record forces itself into discourse with the body of culture represented by popular music (even if it can never join it). Through these recordings, artists speak outward, attempting to infiltrate a more expansive territory, and stake a claim within that ground. They are a Trojan Horse.

Anyone first delving into the world of Artist Records will immediately notice its breadth. Beyond what you might expect, it often includes records whose covers were designed by artists (for example the Velvet Underground, Diana Ross, and Rolling Stones albums with covers by Andy Warhol), and by composers and musicians who were not necessarily visual artists. It is crucial to note the directional character of these efforts. It is their movement that gives them definition. The placement of recordings by canonically recognized composers and musicians into the category of Artist Record is one of the field’s more complex elements. It also hints at its greatest success – the formation of a cross disciplinary discourse of practice and ideas. This is best illustrated by John Cage, and members of Fluxus and the Minimalist movement like La Monte Young, Henry Flynt, Tony Conrad, Charlemagne Palestine, and Yoko Ono – all of whom hold equal standing in the worlds of music and fine-art, but extend to many others. Like their more visual peers, these artists defy the standards of categorization through which sound is most often understood. Though the ultimate context for all subcategories of the Artist Record is the same – LP, tape, CD, players, homes, shelves, this second entry represents a revolution from within – musicians and composers utilizing the concepts and contexts of fine art to expand the possibilities and interpretations of sound and music.

Though I believe ears and intuition are our best guides, I’m also a firm advocate for the importance of context. This is why I’ve gone to some lengths before getting to Primary Information’s wonderful reissue of Dan Graham and The Static’s split cassette At Riverside Studios London, emerging earlier this week. Because both of its sides occupy some of the more complex territories of artist recordings, it seemed worthwhile to lay some groundwork for potential listeners. The tape was originally issued in 1979 by Audio Arts, one of Britain’s longest standing and most respected producers of recordings relating to fine-art.

The first side documents a performance by Dan Graham. Despite the source, it’s important to recognize the tape as an autonomous object, and not strictly documentation. The origin is secondary, the object is primary. Nearly all of Grahams remarkable career has been dedicated to defying and collapsing the boundaries, categorizations, and expectations placed on artists. Through his writing, films, performances, contextualization of sound and music, and architectural statements, he has continuously re-framed our understanding of creative practice for more than half a century. This recording of Performer/Audience/Mirror is no exception. Performance Art is often a stark and serious affair. Given Graham’s challenging character, it should be no surprise to find him turning this expectation on its head. His performance bridges conceptual rigor, and outright hilarity. We find his voice speaking to an audience from a stage. Again, context is as important as the action itself. When this performance was recorded, stand up comedy was in the throws of a golden age. Figures like Bill Cosby, Richard Pryor, and Robin Williams played to packed houses. Records of their performances sold hundreds of thousands, if not millions, of copies. They were a significant part in popular culture. Grahams performance re-frames comedy’s use of the performer as mirror for society (the audience as metaphor). He strips it to its essence. It begins with Graham describing the incidental movement of his body on the stage in painful detail while standing in front of a large mirror. As he continues, the audience’s endurance is tested. Their reactions become more pronounced. As they respond to their own self consciousness, through shuffles and laughter, Graham describes these incidents back to them, folding the distance between himself and his listeners. The performance is made up of four phases – (1) the artist facing the audience and describing himself and the attitudes his movements signify, (2) the artist facing the audience and describing their external behaviors, (3) the artist facing the mirror (back to the audience) and discussing his movements and their signification, and (4) the artist (still facing the mirror) describing the audience and their movements through a reverse perspective. Comedy is often designed to help us navigate our own zeitgeist and social proximity – offering a language for what we already know and need to address, but lack the means to approach. Graham furthers this, creating a mirror for our awkward relationships, and self consciousness, with nightmarish precision. He makes us face something we would rather ignore, while still managing to make us laugh. It is a near perfect work of conceptual art. As a recording, it is decisively places itself against to its nearest cultural equivalent, records of stand-up comedy. His mirror is not only the one on stage, himself, or his immediate audience, but culture and its body of artifacts.

The second side holds a live recording of The Static in the same venue, on the same day. The band was the second project to appear under the guidance of Glenn Branca, following closely on the heals of the Theoretical Girls. Branca is a fascinating figure to approach contextually. He was one of the first people to challenge the frameworks of Punk, forcing it into conjunction with classical music and the art world – taking on the paradox of elitism endemic to all. His work is strikingly singular and defies easy categorization. The Static represent an important transition in the evolution of his sound – as well as within the larger history of music operating outside of mainstream interest. They only existed during 1979, following the demise of the Theoretical Girls (which was an explicate Post-Punk / No-Wave gesture), and slightly proceeding the release of Branca’s iconic Lesson No. 1 (which is decidedly avant-garde). Despite the short tenure, their significance is not to be underestimated. The Static is an aural bridge between the two worlds. It finds vocals playing a less significant part (most of Branca’s subsequent work was instrumental), and the framework of Rock & Roll song structure beginning to fade away, while sheets of dissonant sound take control. It is here that Branca began to hint at what was to come. Fascinatingly, the bulk of the recording from Riverside Studios stands outside of time. Not only does it hint at the emergence of Hardcore, but more importantly it is the first recording of what might be refereed to as “Noise” later developed and pioneered by bands like High Rise, Harry Pussy, and The Dead C, among others – making it both an important document in the history of Punk and the Artist Record. It is a raw, visceral, engrossing recording which is absolutely essential to anyone engaged with the histories of Punk and conceptual practice.

Since its emergence in 2006, Primary Information has become one of the leading lights reintroducing the world to remarkable and neglected gestures of publishing, sound, and image. The work they are doing is incredible. Each emerging title sends my heart skipping.  Their reissue of Dan Graham and The Static’s At Riverside Studios London is no exception. It is an incredibly important document in the history of the Artist Record, not only for its contents, but also for how it helps us understand the field as a whole. It is absolutely essential. I can’t recommend picking it up enough. You can have a listen to samples below, order it directly from them here.