As I woke yesterday, peering through the haze of yet another Mexican hangover, I began to consider my next post. Tony Conrad’s The Flicker popped into my head. The man, who for many years has been one of my greatest creative heroes, had been on my mind. A few days prior I had heard that he had been hospitalized with pneumonia. I wanted to send him a get well card, keeping him in people’s thoughts while he recovered. I decided the film would be a fitting tribute. Resolving to get down to work, but suffering from the indulgences of the previous night, I opted to glance at my email and social media before I began. Within moments posts began to spill into my feed. Tony had passed away a few hours before. My eyes swelled with tears. My heart pushed itself against my chest. The world would never be the same. 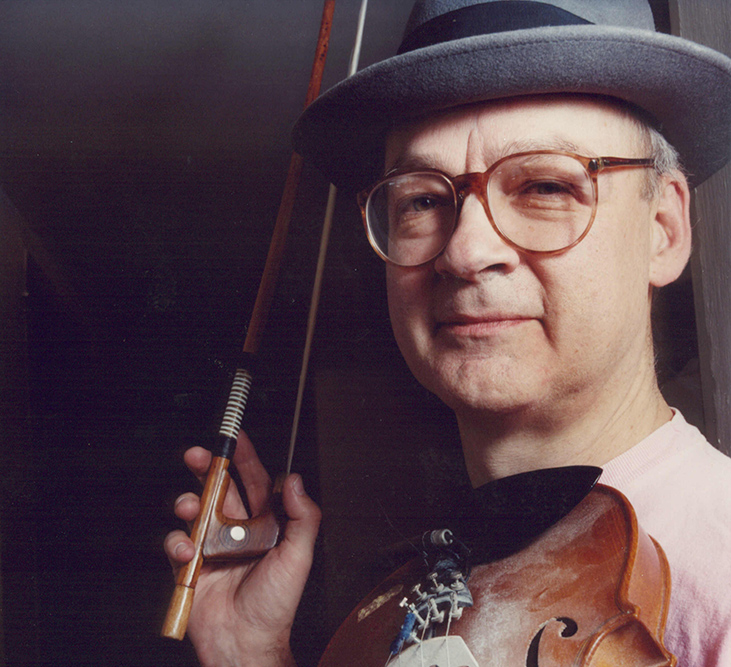 I discovered Tony’s work in the mid-90’s when Table of the Elements began issuing archival recordings. The first notes of his droning violin began a love affair that stretched over the decades. His music retains towering significance in my collection, as does the spirit of its maker in my life. For my regular readers, this should come as no surprise. In the short life of this site, my tributes to him have been numerous. When I first encountered him, Tony was still largely forgotten. He didn’t play out much, but I saw him every chance I could. As his profile began to grow in the early 2000’s, I started to notice him regularly in the audience of shows in NY. I was stunned. This titan of avant-garde music supported, and was as engaged with its contemporary realizations, as he had been with the efforts of his own generation. Though I didn’t meet him until years later, Tony’s presence in our world held great significance for me during my early twenties. This man, only slightly younger than my grandparents, approached life according to his own terms, much the same as he had when he was my age. He had never given up. He had never stopped listening, learning, or being curious. He hadn’t compromised. He was proof that life never had to stop being an adventure, and that I never had to change.

Opening “warning sequence” of The Flicker (1966)

In addition to it being one of my favorite films, The Flicker holds special significance. The first time I saw it was the day I met Tony. In 2007, a couple years after I had moved to London, Eric Namour (who now runs the wonderful El Nicho Festival in Mexico City) set up an incredible concert for Tony at St. Giles Church (if memory serves he played for over two hours). The following day Eric arranged for him to screen a number of his films – all of which were fantastic, but The Flicker stood out and captured my heart. The event wasn’t well attended. After the other members of the audience began to drift out, I took the opportunity to say hello. Though I felt awkward, slightly star struck, and our conversation didn’t last long, I was overwhelmed by how open, warm, and generous Tony was. He knew nothing about me, yet regarded me as a peer. He was a curious about me as I was about him. Once again he proved to be a perfect model for a young man adrift in the world. By chance, we ran into each other a few days later in Basel Switzerland. We were both there for the art fair, and spoke at great length, crossing dozens of subjects. Over the years our paths crossed occasionally. I saw him play every chance I could, and faithfully bought every release that bore his name. In 2011, I was lucky enough to be part of an ensemble that opened for him at Cafe Oto, before which we shared a meal and conversation. It was the last time we spoke. My heart breaks to think I will never hear his voice, or encounter his wonderful spirit and incredible sound again.

Tony was born in Concord New Hampshire, a few miles down the road from where I grew up. He studied mathematics at Harvard, which like his friend Henry Flynt (who he met there), set the tone for his distinct creative approach and intellectualism. During the early 60’s he moved to New York, quickly establishing close ties with many of the avant-garde film makers, artists, and musicians he encountered – particularly La Monte Young, George Maciunas, Jack Smith and Jonas Mekas. Through these relationships he became an early member of Fluxus, expanding his creative practice into music, film, and concept art. In each field he retains historical importance – something few others have achieved. Soon after he joined La Monte Young’s ensemble The Theatre of Eternal Music (The Dream Syndicate) with Young, Marian Zazeela, and John Cale, which also included the occasional participation of Terry Riley. These collaborations yielded some of the most iconic gestures of 1960’s avant-garde music, radically expanding the conceptual possibilities of sound and composition. During the same period he began making films – once again pushing the practice forward. It is during this time that The Flicker came to be, among many other works of equal value. Though Conrad composed on his own extensively through the sixties, after the dissolution of the first The Theatre of Eternal Music he began to recede from the world of music, only issuing one recording – the iconic collaboration with Faust Outside the Dream Syndicate (1973). It would be twenty two years before the world would receive another album under his name. During the interceding decades he focused most of his energies on teaching and film making. It wasn’t until the 90’s when Table of the Elements began their series of archival releases, and he received overwhelming encouragement and support from Jim O’Rourke and David Grubbs, that Tony began to return to music and gather the attention he deserved. Over the last twenty years, Tony rose to iconic heights in our world – becoming one of Experimental Music’s great patriarchs. The music he made was as challenging and innovative as it was when he began. The support he offered those emerging in his footsteps can never be acknowledged enough. He was one of the kindest revolutionaries that world has ever seen. Each foot he placed in front of him, leading us forward, and raising the bar.

The Flicker is acknowledged as a central work in the canon of Structuralist film making. The film was conceived under similar grounds to Bryon Gysin’s Dream Machines – attempting to create hallucinatory optical effects through stroboscopic light. Beyond the warning at the beginning, and the title sequence, it only uses black and white frames arranged at careful intervals. Many accounts from screenings imply that the film does what it intends (inducing hallucinations). With the exception of the opening sequence during which the ragtime tune Raggedy Ann plays, the soundtrack was made on a synthesizer that Conrad built solely for the film. He balanced the sound to 20 Hz so that it would shift between rhythm and pitch. Unfortunately the excerpted version available online doesn’t come close to the experience you have when screening it in a theater, but it gives you a reasonable sense. I hope you enjoy what you see and seek out a better version when you can.

Farewell dear, sweet Tony. For many of us, that the heavily sited quote from your final interview – “You don’t know who I am, but somehow, indirectly, you’ve been affected by things I did.” rings far from true. We knew you. We heard you. We loved you. You were our guiding light. Your effect will be felt for the remainder of our years. As my generation found our gaze drifting toward the past, you focused on our future, reminding us which way to go. You will always live in my heart, and in the man I have become.

2 thoughts on “for tony conrad – the flicker (excerpts) in memoriam”