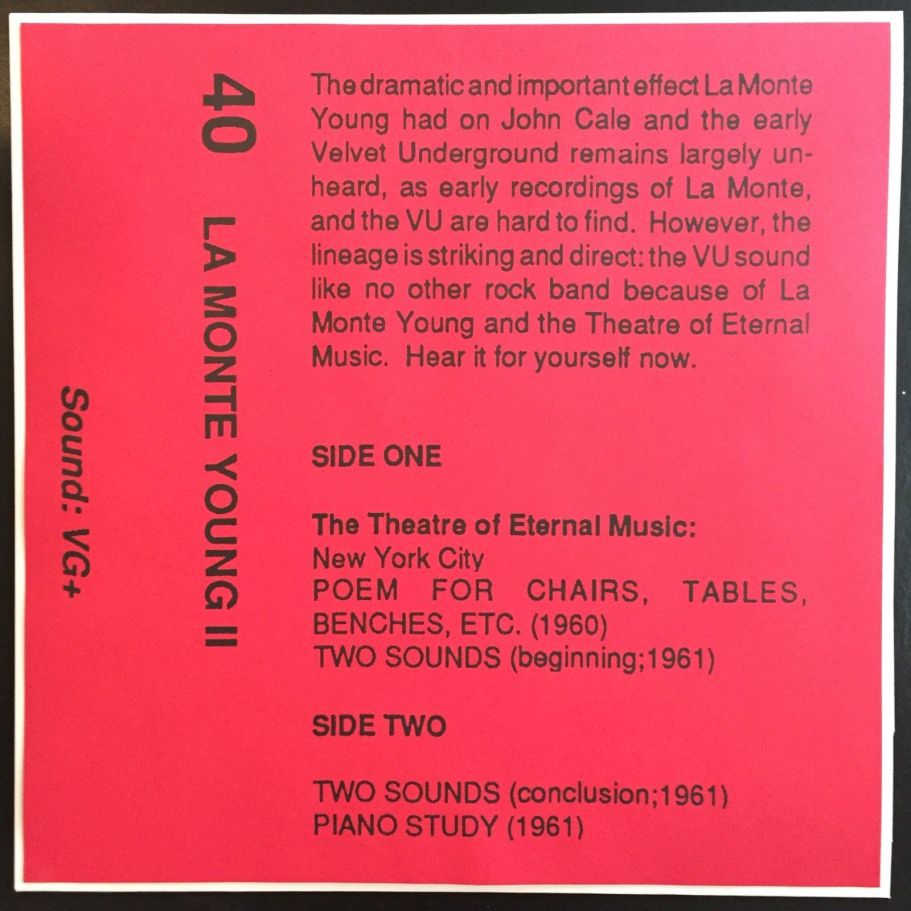 This one’s as murky as it gets – a bootleg of a bootleg. Usually I resist writing about unauthorized releases, but there are exceptions – notably recordings of works by La Monte Young. Not only to do I love the composer, but there is a tragic scarcity of available material. His discography holds far more grey market releases than sanctioned ones. There are two reasons for this. Young rigorously records, but releases very little. He’s had a lot of assistants over the years (most of whom are devoted fans), which has allowed things sneaking out the door. He’s also known for asserting strong control over what and how recordings are released and heard – issuing only a small amount of material in over half a century of activity. This has created a serious demand among his fans – furthered by the fact that most of his authorized catalog was issued by small labels in limited editions, making them difficult to get when they were in print, and now commanding astronomical prices. Though I completely understand Young’s suspicion of record companies, and support his right to control his own work, I also want him to be heard and appreciated. It’s a balance I lack an answer for.

One of the most iconic bootlegs in Young’s catalog is a series of eleven cassettes that appeared sometime in the 80’s. Released by the “Velvet Underground Appreciation Society”, the suite remains one of the most comprehensive surveys of the composers work. Though each tape credits a radio broadcast as its source, most fans believe it to be a well know musician (who will remain unnamed), who reputedly borrowed them from Young’s archive and made copies. For the sake of clarity, this unnamed figure was only responsible for sharing these recordings with friends, not for issuing the cassettes to a wider public. Over the years I’ve hunted for the original bootlegs, but have yet to discover any. They’re pretty rare, and given how unlikely it is to obtain the material otherwise, fans are unlikely to give them up. Two days ago, as I was wandering around the internet, this LP popped into my feed. I promptly ordered a copy.

II is (descriptively) the second cassette issued in the Velvet Underground Appreciation Society series (of those dedicated to Young) – which as the cover describes, set out to explore the origins of the Velvet Underground’s unique sound. It contains three recordings of very early works in Young’s career. Despite what the cover suggests, these are not recordings by the Theatre of Eternal Music. The works predate the group, and in no way resemble their resulting collaborations. They are works that were composed while Young was closely aligned with Fluxus, and are directly connected to the ideas of Concept Art and performance embraced by that collective. The first work Poem for Table, Benches, and Chairs, Etc. (1960) draws heavily on John Cage’s ideas about reorienting the listener’s relationship to sound. Within it, the performers drag Tables, Benches, Chairs, and related objects, across the floor. Their actions, and the resulting scraping sounds, are the work. It’s wonderful, crazy, very dislocating if you forget the source, and remarkably foreshadows a great deal of Noise which emerged decades later.

The second work featured on the tape / LP is Two Sounds (1961), which is similar to the first. Within it two performers scrape cans on a window and a bucket on a glass door. It’s pretty grueling, but equally wonderful. The work was adapted for a dance piece by Merce Cunningham during the mid 60’s. For the performance Young recorded the two sounds on separate tapes, which were to be started at different points during the ballet (and thus different from this recording). Cornelius Cardrew saw the performance and is quoted as saying “When the first sound starts you cannot imagine that any more horrible sound exists in the whole world. Then the second sound comes in and you have to admit you were wrong.”

Unfortunately, I can’t tell you about the final work. I’m unsure what it is, but it may be mislabeled. This is often the case with Young bootlegs. There are aren’t any works with this title from 1961 that I’m aware of. There are a number of things that it might be, but until I get the record I won’t be able to tell. Even then, I might never know. Given that the mystery label only only pressed 300, and die-hard fans will snatch them up fast, I doubt my description would make much of a difference. Those who want it, will want it either way. I thought it best to put the word out fast, rather than wait and let them all slip away.