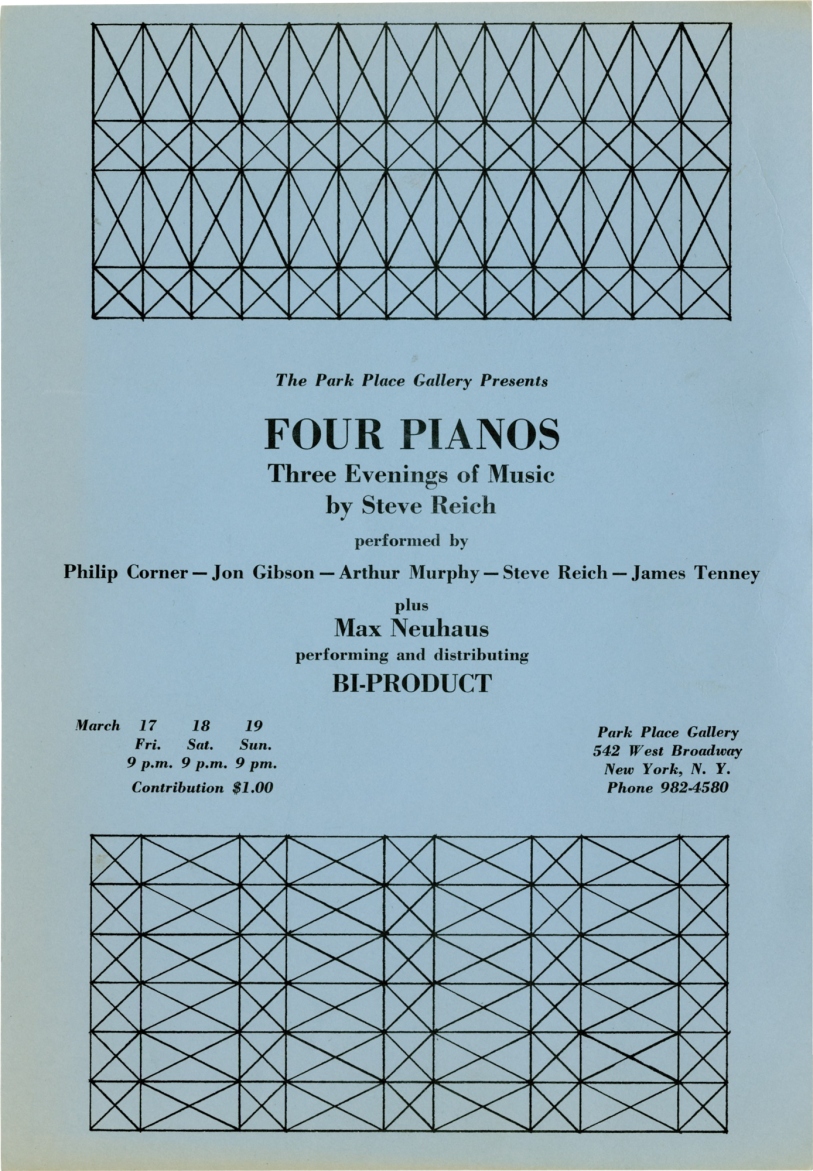 A few weeks ago, I stumbled across this flyer for a series of performances of Steve Reich’s Four Organs. Beyond its obvious beauty, two things caught my eye. The ensemble – Art Murphy, James Tenney, Philip Corner, John Gibson, and Steve Reich, with an additional performance by Max Neuhaus, and the location – Park Place Gallery. There’s my obvious blinding envy of those who were in attendance on those evenings, but more significantly the poster represents a rare (and particularly concise) window into 1960’s avant-garde practice and development. Though Art Murphy and John Gibson’s musical legacies are strongly tied to Reich’s (the three founded the Steve Reich Ensemble in 1966), Tenney, Corner, and Neuhaus are generally approached as free standing figures within the history of 20th century music. The poster encounters them in roles of close collaboration and support. Particularly because these events, which took place on March 17th, 18th, & 19th, 1967, represent the premier of a seminal work of 60’s avant-garde music, it allows us to understand a larger framework of discourse surrounding the development of the ideas and practices which came to define that generation.  These central members were working together and not within the singularity that history often implies.

This armature of discourse, support, and collaboration was mirrored by the venue which hosted the performances. Park Place Gallery was one of the most important institutions within the history of 1960’s creative practice. Generally credited as the first gallery in SOHO, it was set up by Mark di Suvero, Frosty Myers, Robert Grosvenor, Ed Ruda, Dean Fleming, Leo Valledor, Peter Forakis, Tamara Melcher, and Tony Magar, as an effort toward a freestanding infrastructure of artist collaboration and support. Within the same complex as the gallery, the collective established studios and workshops, taking control of the full arc of production and distribution. Beyond showing their own works, the founders made a focused effort to champion many of the most radical artists, composers, and writers of their generation with an incredible series of exhibitions, concerts, and events which stretched over the years of its existence. For most of its life, Park Place was run by Paula Cooper. Given that most of my readers are not members of the art world, Paula’s name might be unfamiliar, but within that context she is a legend. After Peggy Guggenheim and Leo Castelli, she might be the most important and influential dealer of the 20th century. She also happens to be my former boss and someone I hold very dear to my heart. What few people know is that Paula has been a silent underwriter of much of New York’s culture of avant-garde music for roughly half a century, beginning with the series of concerts at Park Place that housed the premier of Four Pianos.

Paula is said to have been the most beautiful woman in NY during the 60’s and 70’s (I would argue she still is). I have had conversations with many of the towering giants of Art History, watching their eyes go glassy and soft when they speak of her. Paula’s beauty can be disarming. She possesses one of the most fiercely principled intellects I have ever encountered. Art isn’t a means to an end, or a matter of economy. It’s everything, and doesn’t stop at the gallery walls. Over the time I spent with her, most of our conversations drew on a shared conviction in the value of art, our desire to protect it, and a deep love for literature. What took time to discover was Paula’s relationship to music. She’s not one to sing her own praises, or to dwell on the past. Her contributions and achievements are so vast that it’s impossible to stop at just one. Importantly, she’s never looked over her shoulder. Her eye is on the future – on what she can do next. I think she knows that no one can do quite as well as she can, and is afraid that her artists won’t get the support they deserve if she steps away. Knowing how much she gives, I think she’s probably right.

Not long after I began working at the gallery, it hosted a concert by the S.E.M. Ensemble. I had already taken note of a small display of CD’s behind the front desk which featured them, but given the current trend focused on avant-garde music in the art world, I didn’t give them much thought. The concert implied an expanded dedication on the part of the gallery which made me curious. As I began to make inquiries into its reasoning, I quickly discovered that evening was neither chance, circumstantial, or isolated. Paula had a long standing and deeply convicted devotion to avant-garde music. More than anything, she was simply a fan. Unlike most of us, she had the means and the infrastructure to help.

Paula’s ear is hard to catch. The gallery is a frantic place, and no one is busier than she is. As I began to scratch at the surface of her history within the music I love, I was increasingly compelled to tie her to a chair and force her to talk to me – to tell me everything. The impulse partially drew from my overwhelming curiosity, and because I enjoyed her company and conversation so much, but most importantly because the temporality in which gallerists receive acknowledgment is often constrained to their own time. History loses track of them, while their efforts and achievements fall into the shadow cast by those they support. Paula’s importance is so vast and wide reaching, but she so rarely stops to dwell on what she has done, that I was compelled to collect and protect her legacy. To find a way to convey how much she had contributed to the world of music that so many of us love. 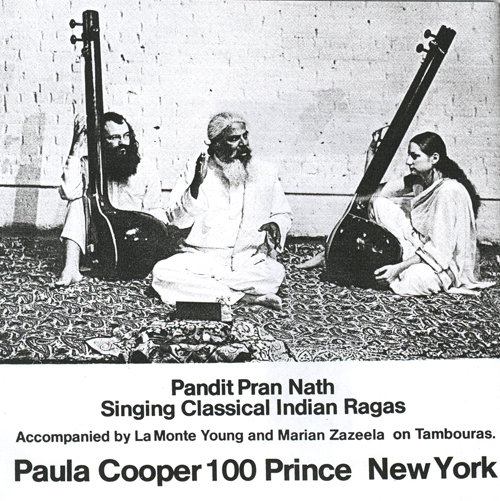 Sadly, by the time I left the gallery, I had never gotten around to “tying her to a chair.” Most of her history remains locked away. What I did learn was the result of obsessively scratching at the surface. I discovered the concerts at Park Place. I learned that when the gallery closed she continued them at the new space which bore her name (the few I have found reference to look astounding). I learned that she was among the first patrons, fundraisers, and board members of The Kitchen (and I believe continues to be), tirelessly supporting its dedication to ambitious music, and largely during a period that her own gallery was barely keeping its head above water. I learned that the CDs behind the front desk, featuring titles by S.E.M, Morton Feldman, Marcel Duchamp, Christian Marclay, and others, were in fact issues by a small record label called Dog W/A Bone that she  founded and runs to support the music and artists she loves. And I learned that the concert by S.E.M  during my early days at the gallery (there were others as time went on) was part of a long thread of events that dated back half a century, pushed on by a resolve and belief in this music that had never weakened.

My efforts generally fall within the fields of recorded music – on documents and  artifacts. I hope to combat the neglect suffered by so many of the sounds I adore – to offer them the attention that they deserve. In most cases my gaze falls on those who make, produce, and support ambitious realizations of music. What we rarely stop to consider is that recorded music is the result of a series of long processes, many of which begin in a live context – in concerts and performances. These beginnings are easily lost in the haze of memory and time, unable to travel with us as a record or document might. It’s important to stop and consider those like Paula who lay behind the scenes. The ones without whom there would be nowhere to begin. The ones that have always been there, supporting it all, too humble to tell their own stories, and who we too easily forget. Without them we would have nothing (or far less). They deserve our thanks, attention, and a place in our minds. I wish I could tell you more. Perhaps one day there will be someone who will. For now all we can do is cast our gaze across these six flyers for Steve Reich concerts, allowing our thoughts to rest on those who make it all happen. 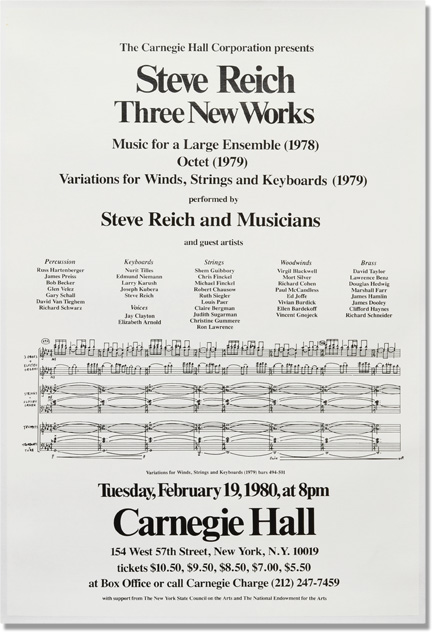 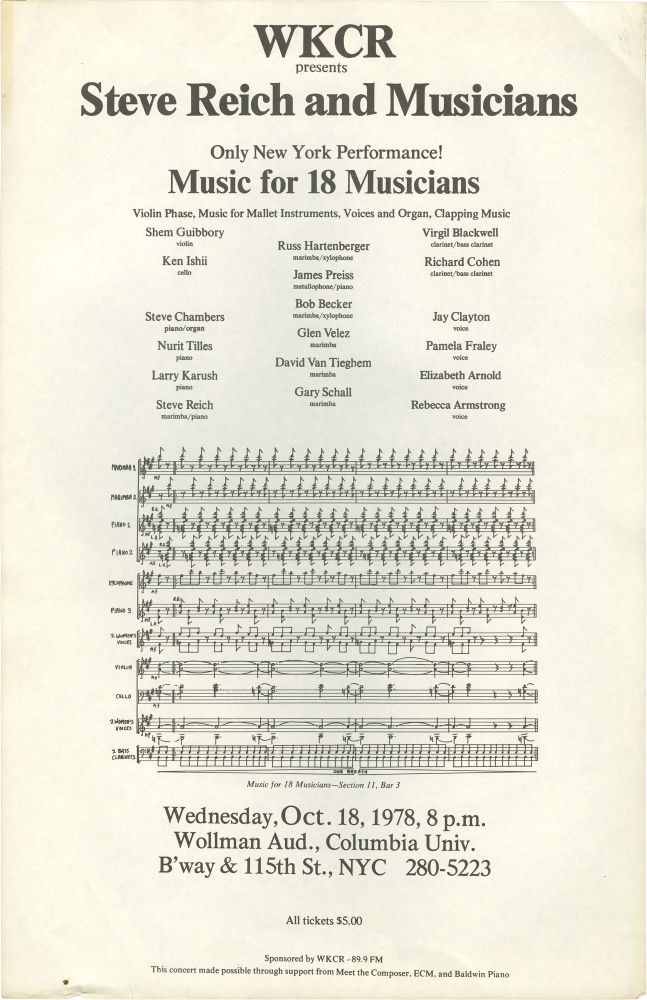 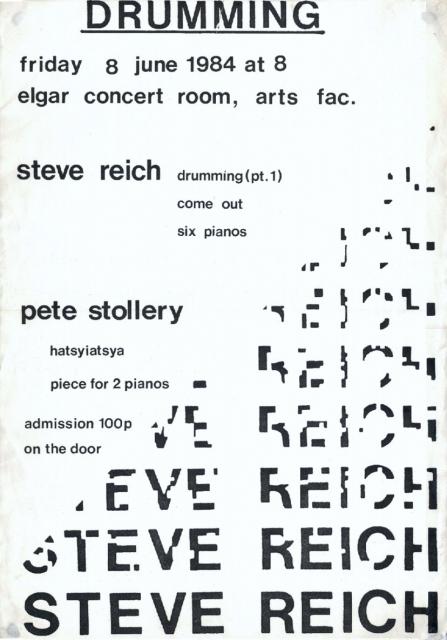 Flyer for Steve Reich and Musicians at University of Birmingham, June 8th, 1984 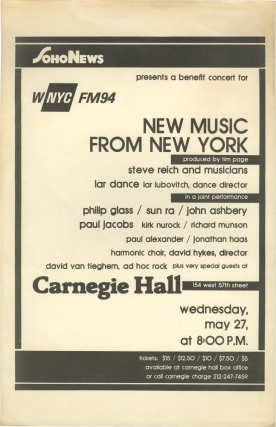