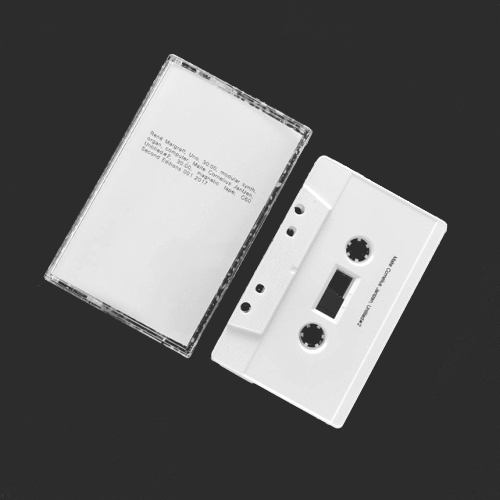 There’s something about tapes – especially as a place for contemporary labels to begin. The format doubles as en ethos – a statement of creative proximity and intent, as well as an economy which serves the artist, imprint, and listener alike. I find myself increasingly loyal to these objects. They particularly perk my interest when placed at the forefront of a project’s launch. More times than not, it implies that my ears are in for something good. Such is the case with the debut of the Berlin based label Second Editions, a split double a-side tape by René Margraff and Malte Cornelius Jantzen. 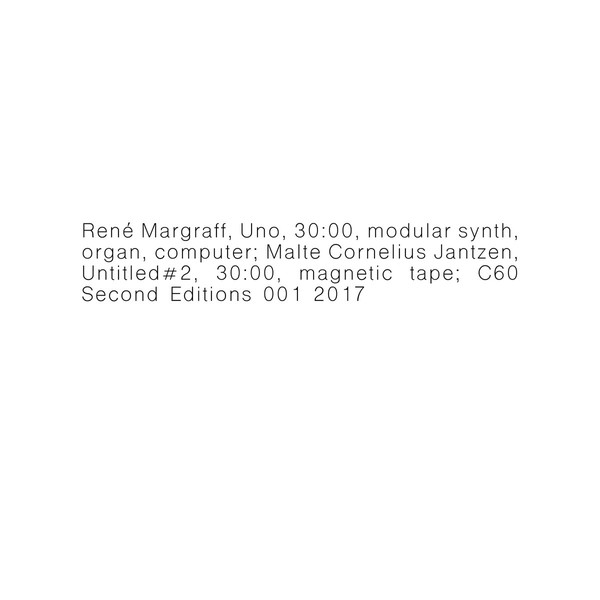 Over the course of the last decade, René Margraff and Malte Cornelius Jantzen have been issuing a steady stream of sounds into the world, each working under their own names and a number of monikers – Jantzen often under S ND Y P RL RS (there was a great LP a few years back on Umor Rex) and RVNES, while Margraff most regularly uses Pillowdiver, occupying a noted place in Berlin’s ambient drone scene. Their Second Editions tape features a new work in this territory by each.

Margraff’s Uno, stretching to a full 30 minutes, is a work for organ, modular synthesizer, and computer – a rippling realm of ambience, harmonic interplay, and extended tone. Incredibly slow to unfold, in many ways Uno appears as the fulfillment of Satie’s ideas of furniture music, carried further by Brian Eno’s gestures of discreet / ambient music, and is only truly accessible through Pauline Oliveros’ concepts of focused listening. This is music which almost isn’t – akin to an ungrounded speaker in the distance, or an industrial drone – the harmonic sounds of the background, where treasure flirts – drifting in and our of view. Uno is an effort in which subtly is a ruse and a demand, a veiled door behind which lies endless reward. As such, it is fascinating. So unassertive, that it’s easy to imagine it could never be heard the same way twice. A pulsing, droning world of discreet beauty, only open to those who are willing to put in the work.

Malte Cornelius Jantzen’s Untitled #2 is perfect proof of the curatorial strength already present at Second Editions’ core – a brilliant counterpoint to Margraff’s work on the flip, as well as to the arching progression of its artist’s concerns. Jantzen’s earlier work under S ND Y P RL RS was largely built from the slow doomy drone of distorted guitar, followed by his efforts under the moniker RVNES, which took a similar approach to abstract electronic noise. Under his own name, he has arrived a facilitating place – coherent within his larger body of work, while sculpting new complex territories of tone. Untitled #2 falls within the territory of sound explored by Christopher Tree (Spontaneous Sound) and Harry Bertoia – abrasive reverb drenched ambiences which recall the low rumble of industry, rolling bass drums, cymbals, and gongs – establishing a stunning duality across the tape as whole. Much like its companion on the other side, the work eludes the depths discovered in often unacknowledged sound – requiring focus and attention to unveil, while its approach, materiality, and effect couldn’t come from a more different place. Jantzen’s piece falls much more easily into the category of noise, yet presents a startling accessibility – an immersive beauty pulled from darkness – one hard to leave once entered. A moody, grinding, intricate world of complexity, defying presumption and expectation, and forcing nature to be approached anew.