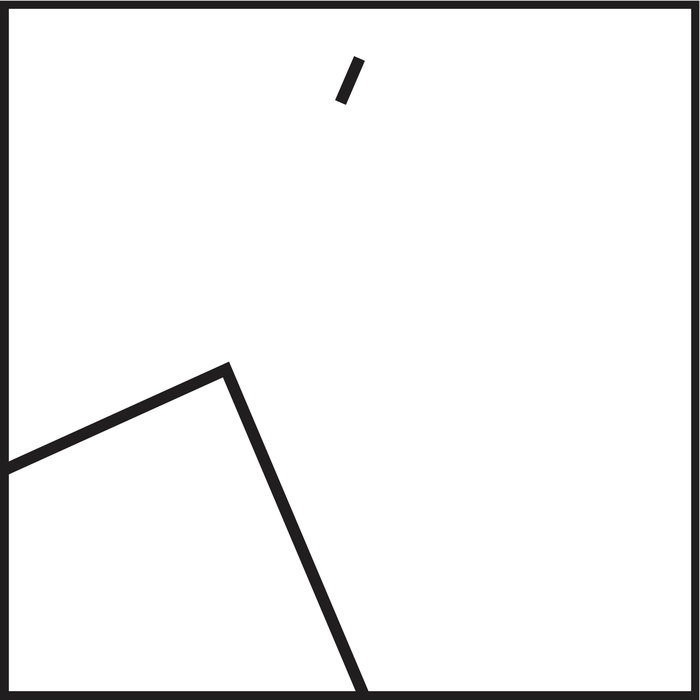 Sound is naturally transient. It slips through borders and divisions. It defies time. Music – the organization of sound’s materiality, is language. It is a means through which we speak, hear, and understand – where elements of ourselves, our cultures, and our histories retain integrity, lost when simply described. Experimental music, of all the contexts of organized sound, is arguably the most focused and conscious distillation of this arc. It is, in discrete moments as much across its sprawling networks, a world for which conversation is a central goal. Of all the contexts of experimental music, those emerging from Latin America have long offered a crystalline means of understanding the truth, beauty, and challenges facing this trajectory in sound. Efraín Rozas, through his cassette I Enjoy The World – issued by the brilliant Lima based Buh Records, activates a window into this world.

While it is important to recognize distinct cultural and historical specificity – in this case that of Peru, the country to which Rozas was born, when viewed from afar, across Latin American a great many countries have experienced eerily similar historical, cultural, political, and creative trajectories through time. It is useful, when attempting a vision of the scope of what has transpired, to speak broadly and generally, despite its risks. Nearly all had thriving, sophisticated indigenous societies during the Pre-Columbian era. Most fell under the brutal colonial rule of the Spanish, who employed consistent tactics of enslavement and cultural repression toward those indigenous peoples. During the first half of the 19th century, with the exception of Cuba and Puerto Rico, all of the countries under Spanish (and Portuguese) rule gained independence. And, despite the roughly two centuries which have passed, many are still fighting against the legacies from which they sprang.

Following its respective independencies, during the 19th century, much of Latin America was occupied by border disputes and the building of infrastructure. Toward the century’s end, with these largely resolved, many countries began to examine the make up of their societies as a whole, with the lasting structural and existential effects of colonialism. In nearly every case, individuals of European lineage still retained the power and money, while poverty and political repression enveloped those of indigenous descent. This gave way to vast left-wing movements, funding the arts, and setting out celebrate and highlight the cultural heritages connected to Pre-Columbian societies, represent and serve society as a whole, and ultimately destroy racially based disparity. It was this movement which gave way to the first gestures of Latin American Modernist music.

Most Latin American Modernist music of the late 19th and early 20th centuries is structurally related to a broader movement of composers –  Rimsky Korsakov, Stravinsky, Tchaikovsky, Vaughan Williams, Bartok, etc, who incorporated elements of folk traditions into their compositions. It’s a hybrid form. Unlike European composers, mostly drawing from cultures beyond their own, Latin Americans drew from within – their indigenous sonic traditions, grafting its instrumentation and structures.

A crucial recognition about the arts in Latin America, is that they can almost never be completely divorced from the social, cultural, and political landscape. Even when not explicate dealing with it as concept or subject, they have always been directly effected by it. Equally important to note, is that, because of endless cycles of political and economic instability across the region, many of the same existential challenges to society, faced by those at the end of the 19th century, still exist today.

Within all of this, and springing from it, lingers one of the most neglected histories of avant-garde and experimental music. A context displaying a near perfect vision of the purpose of these sounds, but which has suffered dearly under the burden of our sins. The foundations of Latin American avant-garde and experimental music largely extend from the hybrid forms which define its early Modernist movements – bridges or conversations between European and distinctly Latin American and indigenous cultural paradigms. Like the countries themselves, these musics are melting pots. As the first part of the 20th century wore on, increasingly due to a spike in the immigration of European intellectuals, musicians, and composers fleeing Nazi persecution, many bringing with them the most radical sonic innovations of the day, from these countries emerged some of the most forward thinking musics of the era.

The end of the Second World War gave way to one of the most remarkable periods of the global sonic avant-garde. This fact is well known and widely written about. What has been tragically lost and suppressed, is that countless Latin America artists were central players in the conversations which emerged. As networks reopened, some of emigres returned home, retaining connections with those they left behind. Others stayed, encouraging European and North American friends and colleges to join. Equally, countless Latin Americans went to Europe and and the United States to study, compose, collaborate, and play, returning and raising the bar. Their conversations criss-crossed the globe. Consequently, many of the first electronic and electroacoustic studios in the world were founded in Latin America – issuing a remarkable, culturally distinct landscape of sound.

Beginning in the 1950s, 60s, and 70s, throughout Latin America democracy began to fail, ushering an era of severe right-wing political oppression and dictatorship – beginning a process which shuttered much of its creative life from the world. The people of Chile, Peru, Argentina, Bolivia, Brazil, Paraguay, Uruguay, Panama, Ecuador, Columbia, Honduras, Nicaragua, El Salvador, Guatemalan, Venezuela, and Mexico, all fell under some form of extreme right-wing political force during this era, many gestures of which were backed by the United States. As is most often the case, the creative avant-garde was among the first to be suppressed.

When addressing the history of the Latin American sonic avant-garde, and trying to understand how it came to be lost to those beyond, there are a number of important recognitions to be made. In some cases artists had their voices silenced through persecution. Many left for good, becoming absorbed or appropriated, as was the case for Kagel, by external traditions. Recording industries were almost always dismantled or heavily monitored and censured, limiting the ability for voices to travel or be documented. Performance opportunities were equally restricted, but these were not the only forces at play. Remembering that these right-wing governments were most often supported, and in many cases installed, by The United States and their European allies, we can not discount an external drive toward hegemony. As the political architectures of The United States and Europe believed in their own superiority, while fearing the spread of the Latin American left, so too have academics and historians perpetrated similar beliefs when sculpting the histories and narratives of the avant-garde. The stories we have been told are radically (and often willfully) incomplete, favoring artists from Europe and the United States, with the presumption toward the cultural hegemony of those countries at large, at the expense of the truth and remarkable scope of what occurred.

In recent years, there has been a quite movement to unwind the sins of time – to tell the tale of the Latin American avant-garde, and send its voice, both present and past, into the world. At the forefront of this, is the Lima based imprint Buh. Run by Luis Alvarado, the label has been taking astounding strides toward resurrecting past artifacts of Peruvian avant-garde and experimental musics, offering and equal dedication to their present day realizations. Particularly in the case of their Sound Essential Collection, which I profiled last year, an incredible window opens into the evolution of these movements and their thinking – how they adapted and survived under severe oppression, with the remarkable sounds they made. A crucial component of this music is the struggle for political and cultural identity, one extending from the early Modernist hybrids, which sought to bridge cutting edge ideas with ancient counterparts – to join European, Latin American, and indigenous sounds, sculpting a sonic vision of democratic truth.

Buh’s latest release, a cassette by Efraín Rozas, a Peruvian born, New York based musician / researcher, entitled I Enjoy The World, is inextricably linked to this long arc. The album is the result of six month experiment, during which Rozas attempted to modify his relationship to mysticism, via everyday life experiences. Consisting of different techniques – sexual repression / excess, cybernetic disconnection / hyperconnection, fasting / psychoactive hyperstimulation, he sought a new form of personal mysticism, drawing on a need to escape the dynamics imposed by our technological world. The albums itself was created using a series of homemade (software and hardware) instruments, during each of these states.

I Enjoy The World, like a great deal of Peruvian and Latin American avant-garde music, might be best understood as a network of hybrids. It is the product of creative singularity – the distinct ideas, experience, and process of its creator, while entirely linked to the discourses around cultural production which have long been connected to those regions. These musics, sometimes consciously, others by default, are inherently political. They are the voice of the people – its oppositions, as much as who they are. This network of ideas, though not explicitly said, is conjoined to Rozas’ latest release. It is a rejection of the technologically born hegemony of the present day. It is a quest for a deeper, more elemental meaning behind who we are.

Sonically, Rozas’s efforts emerge as logical extension of his Peruvian predecessors Arturo Ruiz del Pozo, Miguel Flores, and Luis David Aguilar, while equally connected with the movements of those artist’s peers across Latin American, notable the Venezuelan collective Musikautomatika and artists like Jorge Reyes, Carlos Alvarado, Luis Perez, and Antonio Zepeda who emerged from Mexico. Like those before him, Rozas’s establishes a bridge between the ancient indigenous musical traditions of his country, and a utopian rendering of a possible future through electronic processes – at once metaphysical, and grounded in the real. Through his altered states, emerges a pulsing textural world of rhythmic complexity and ambience – one markedly in defiance of time, speaking from the past into the endless beyond. While engrossing and creatively brilliant on every count, I Enjoy The World equally presents a multilayered reminder of the spirit of the avant-garde, and the political potential of music at large. This is a realm in which neither making nor listening is benign. It is a lens into the mistakes of the past as much an offering of the potential of what we might become – of our tangled web of discourses extending across the globe. You can check out the audio below or a companion video for the album animated by Muriel Holguín above. Order the cassette directly from Buh. I can’t recommend this one enough.